Well, an old horror enthusiast like myself couldn't hold out against Hallowe'en all month, now, could I? (Even if Blogspot pulls a little trick on me in dumping the final several drafts of this message, with no means of recovery. Imagine my carefully considered response, albeit silent.) Particularly as one of the first half-dozen most important books of my youthful development as a horror reader remained unremarked: 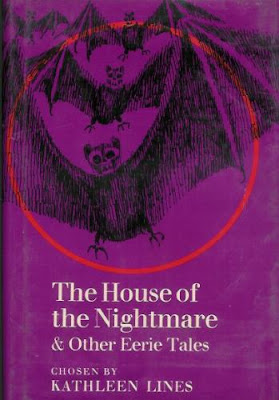 Contents courtesy of Vault of Evil:

Originally published by The Bodley Head (1967)
Later (paperback) editions published by Puffin Books; US edition 1968 from Farrar, Straus and Giroux

This would be my first encounter, at age 8 in 1973, with Elizabeth Bowen, W.W. Jacobs and his "Paw," M.R. James, E. L. White, Lucy Boston, only the third and most memorable so far with Saki, similarly early experience with Ambrose Bierce (interesting that he and only he gets two entries...both their excellence and their public-domain status might've played a role) and Walter de la Mare (particularly as prose-writer and not poet); the only prose I've probably seen from Henry Cecil, whose name I'd forgotten for decades, though I might well've seen some of his television scripting, for Alfred Hitchcock Presents:; his "Proof" was a deft, neat (in all senses) vignette that is particularly the kind to stick with a young reader (not unlike, say, Jerome Bixby's "Trace" or Ted Thomas's "Test" or Joseph Payne Brennan's "Levitation"). And, with the retelling of the "Mr. Fox" folktale, I had my first insight into the true meaning of my given name. The "true" encounters section was vaguely irritating, to the young skeptic I was, even when contributed by Rosemary Sutcliff, but I was a catholic reader at the time, willing to give the account a chance to spook me on its own terms (after all, slightly later, the usually fraudulently "true" Ghosts was one of the less-bad DC horror comics available, and at least one Strange, Unsolved Mysteries volume, probably from Dell but I have no memory of author, was kicking around the house with some interestingly sexually-explicit accounts among its other "true" hauntings and such). Lines, primarily a writer for young readers, would eventually produce a comparable sequel anthology, The Haunted and the Haunters (1975; with the US edition having a much better package), by which time I'd already been more than introduced to the Algernon Blackwood (multiply represented) and Joan Aiken and even Anthony Boucher and Graham Greene it proffered, though the title story was one of my first encounters with Bulwer-Lytton, before the bad-fiction contest in his dishonor was founded. 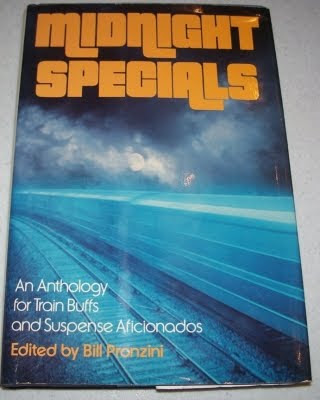 While Richard Robinson did Midnight Specials as one of his FFBs in 2009, I note it was the first anthology edited by Bill Pronzini I'd read, just after it was published in 1977 (and for good reason as it's only the second he published, I think, after a fine-looking collaboration with Joe Gores I'd missed altogether); it turned out to be an excellent and comparable supplement and peer to the eclectic Alfred Hitchcock Presents: and similar anthologies, edited by Robert Arthur, Harold Q. Masur and others, I was tearing through in the mid-'70s. All built up around trains and train-travel, it ranges from Barry Malzberg's first-publication-here sf story (which gave its title as well to one of his richest collections, the 1980 wrap-up of the previous decade) to my own first encounters with Edith Wharton, Irvin S. Cobb, and Howard Schoenfeld (like William Stafford interesting not only for his art but for his pacifism), among an otherwise stellar lineup (including a few already old favorites of mine, very much including the Bloch and Noyes stories). Pronzini's own fiction I was familiar with from various sources, mostly Hitchcock-branded (including the back-issues of AH's Mystery Magazine I'd read), but his name in the editorial by-line became one to look for. Turns out, that was a good bet.

Pronzini began editing one impressive anthology after another, many of them, from the end of the '70s till the imprint's fading away, for Arbor House, who really didn't know how to package a horror book, as the covers for these examples make entirely too clear (when The Arbor House Necropolis was reprinted by a remainder publisher as Tales of the Dead, it actually had a better and subtler cover [see below], which might be almost a unique occurrence in such relations). Nonetheless, the series was uniformly excellent, featuring as it did a lot of my favorite chestnuts along with good to great less-obvious or blatantly overlooked items to fit each monstrous category. I might've added Malzberg's "Prowl" to Werewolf!, but Malzberg (or his Doubleday editor) had left it out of his Midnight Lady collection, too, and perhaps I like it a lot better than Barry does. 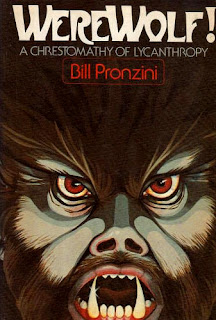 As the very fact of the of the omnibus status of the Necropolis suggests, Werewolf! was just one of a line of single-theme volumes, though by 1981 Arbor House was apparently suspecting that large anthologies were easier to market, in trade paperback as well as hardcover, than smaller ones...the Necropolis has been much easier to find in libraries and such over the years than, say, component volume Ghoul! published on its own (the omnibus title just sounded that much better on the New Adds list, too, I suspect). It's also worth noting that after Werewolf!, Pronzini was buying new stories for anthologies in the series, which would continue as the themed anthologies gave way to the more eclectic volumes below. 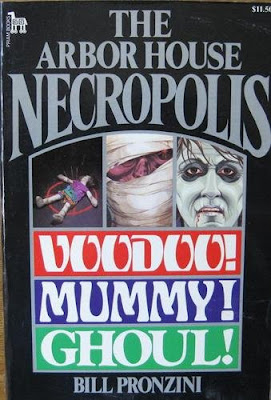 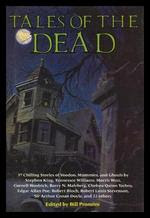 Pronzini, in beginning to put together rather more sweeping surveys of the literature of terror, brought in his friend and collaborator on both fiction and earlier anthologies, Barry Malzberg, and Martin Harry Greenberg, only beginning to become an anthology industry. And they put together some pretty damned impressive books, too...with Pronzini and Greenberg going on to do similarly impressive work in the western field as well as others, and Pronzini on his own and with Ed Gorman continuing to produce extraordinary anthologies for Arbor House and such successors as Robinson and Carroll & Graf in the "Mammoth Book" series, and more. While it fell to Robert Silverberg, who had edited The Science Fiction Hall of Fame's first, short-fiction volume (as president of the SF Writers of America at the time), to go on to edit fantasy and horror "Hall of Fame" volumes, Pronzini would do similar volumes for mystery and western fiction. While there have been similar attempts at sweeping anthologies of horror and of suspense fiction since (such as Charles Grant's similar, contemporary volume for Dodd, Mead, Peter Straub's fine recent two-volume Library of America horror set, David Hartwell's good [if not so well-introduced] historical omnibus of horror, and Jeffery Deaver's unsurprisingly somewhat disappointing suspense-fiction roundup), the Pronzini, et al., volumes compare favorably with any similar productions before or since. They certainly brightened and further broadened my reading experience toward the end of my high-school career, though by then only a few of these bylines were unfamilar. And it's notable that Arbor House had opted for rather tasteful, bold all-text covers...a wise choice. 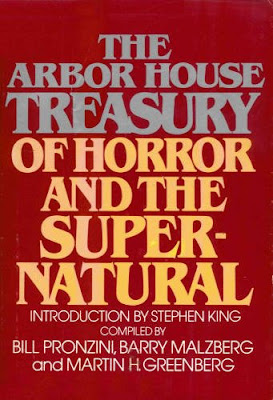 This one has had a long life as an instant-remainder reprint, usually in some diminished-contents way...last year, it was reprinted as Masters of Horror & the Supernatural: The Great Tales (Bristol Park Books, which I believe is a Barnes & Noble imprint), with, as ISFDb notes, three stories (by Faulkner, Capote and Samuels) dropped.

(I here poach the index of one of the instant-remainder editions for this one, for convenience/laziness's sake...) 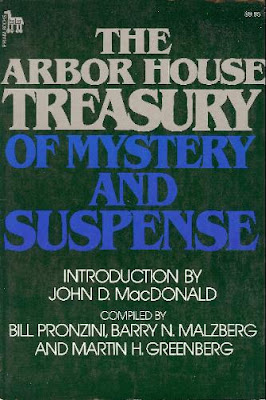 Wow, that's a long list of things. I shall have to come back and go through them more carefully. Good stuff though!

Value for no money, here, I hope...every time out! But particularly the latter Pronzini anthos were intentionally massive.

I bought most of these anthologies back in the 1970's and 1980's and enjoyed them all. These are good collections for Halloween.

I mostly borrowed copies from libraries back when, but I've been picking them up off the used market, for the most part, in recent years (though I did buy the odd item such as TALES OF THE DEAD when that reprint was new).

Yep, great scary-season choices, and thanks for the nod. I have/had that Arbor House mystery and Suspense, and have read it, but honestly don't remember anything, not even if I liked it. I probably read it over a span of time that took most if not all of the punch out of it as a collection. That's something I do with ss collections from time to time, as I get the itch to be reading a novel-length book with more plot and character development.

As for the Pronzini edited MIGNIGHT SPECIALS, Ido recall liking that one, as much for the railroad theme as the supernatural one. I was fscinated by trains and especially model railroading as a kid, my older brother and Dad built a layout which I, six years younger, wasn't allowed to touch, only look at. (or should that be "at which I was only allowed to look"? I suppose but it's awkward.) I was allowed ro look at the issues of Model Railroader and Trains that were in the house. So anything with a railroading theme was of interest, still is. I even managed to buy a few Rail Stories pulps not to long ago, though I haven't dug into them yet.

I should ask him, but I suspect the slice through history (and to some extent geography) that the train theme allowed was a big draw to Pronzini choosing to put that together as his first solo antho.

A whole lot of the fiction in MIDNIGHT SPECIALS, after all, is not supernatural nor horror at all.

I own the ARBOR HOUSE anthologies. It breaks my heart that books like these will never be published again. The market for these works has almost completely vanished today.

Well, George, the small presses are still doing them (see Cemetery Dance's Century of Horror item), and occasionally a franchise book, such as HMCo.'s BEST AMERICAN of the Century items, or that recent LoA Peter Straub I mentioned, are certainly comparable.