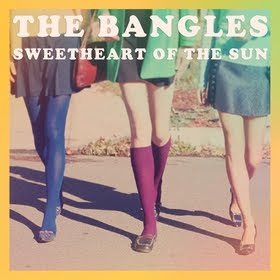 The Bangles, now formally down to the three founding members, have produced the album the Bangs (as they were known in 1982, before deciding not to be confused with other bands called the Bangs) might've offered...a relatively lean, intentionally nostalgic harkening back to the direct influences, when they were part of the LA neo-garage/psychedelic rock movement that would eventually be tagged the Paisley Underground, and less of the ever-fuller sound of their 1982 Faulty Products EP The Bangles (re-released by Faulty owner Miles Copeland's better-established IRS Records, who perhaps hoped to have another Go-Go's in their stable, without having to create one out of whole cloth as they would a few years later with the failed American Girls), and their first full-length album, All Over the Place (CBS, 1984), the latter also the first recording after bassist Annette Zilinskas left to be replaced by ex-Runaway (Ms.) Michael Steele. The crunchy guitar-driven power-pop of the brilliant first CBS album was largely supplanted by a more "radio-friendly" sound for the next two CBS albums, their commercial breakthrough Different Light (1986) and their final CBS offer, Everything (1988), which also followed such odd developments as Prince (Rogers Nelson) offering his womanfriend, rhythm guitarist Susanna Hoffs, a song (credited to "Christopher") for the second album, and a CBS-TV series from Scholastic Productions, the dire children-oriented sitcom Charles in Charge (beginning Fall 1984), having an original opening theme that was almost a note-for-note plagiarism of the melody of the Bangles' early 1984 recording "Dover Beach" (albeit performed much less engagingly). CBS machinations among other pressures caused the band to break up after that third LP; they went on to various projects, with lead guitarist Vicki Peterson even touring with the reunited Go-Go's to spell the pregnant Charlotte Caffey. When the Bangles reformed, first to do a single, "Get the Girl," for an Austin Powers film soundtrack (Hoffs's husband was the director of The Spy Who Shagged Me [1999]), then eventually to record a reunion album, Doll Revolution (2002), which, rather as with fellow Angelenas the Go-Go's and their full-length reunion album God Bless the Go-Go's (2001), demonstrated the band members' dealing with concerns of women now in their forties, and yet not tired nor simply nostalgically reaching back to their old sound...in fact, as the concert video The Bangles: Return to Bangleonia: Live in Concert (recorded 2000; released 2007) suggests, their long-term love of such bands as the Byrds extended to taking on an almost country-rock sound in this later work, particularly in the performance of such new songs as "Ride the Ride" and "Nickel Romeo."

Despite the presence of lush power-pop guy and long-term Hoffs collaborator Matthew Sweet as co-producer and occasional instrumentalist here, the tracks are relatively lean, the eleven original songs (and one cover, of the Nazz's "Open My Eyes" for an infusion of the Who via Todd Rundgren) are interesting in the small countermelodic figures that pop up in several spots and other songcraft elements of their fellow Paisleys and their mutual inspirations (see Where the Action Is for a partial accounting of them); the vocal harmonies are as deft as you might expect, and the instrumentals are as crisp as one could ask for...so, if the band as it existed in 1981 had thirty years of professional experience behind it, this is pretty much what they might've sounded like:

A fragment of the studio version of "Open My Eyes":


A live version from a year back (and you have to doubleclick for full screen, or open in its own window, to see Debbi Peterson as she counts off and sings co-lead):


And, with apologies, the original version of the Charles in Charge opening theme:

Email ThisBlogThis!Share to TwitterShare to FacebookShare to Pinterest
Labels: Bangles

Not at all. Even though I managed to miss them opening their concert tour in Philadelphia last weekend, I wasn't about to let this record go by w/o comment.

Good to hear that the Bangles still have their magic! Thanks for posting!

I saw the Bangles singing on one of the network morning programs. I might have to look into this.

Much better tardy than never at all! (Why, by gum, I liked them when mere thousands knew of them! Or tens of thousands, maybe.)