FFB: THE ENCYCLOPEDIA OF JAZZ by Leonard Feather (Horizon 1960) 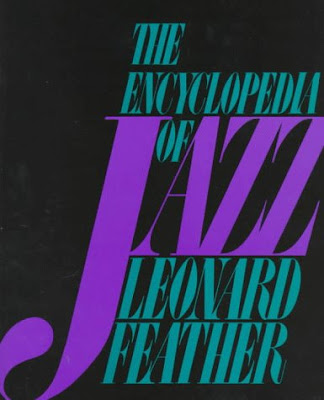 This is another of those books so seminal, so omnipresent in my youth, that it's hard to imagine that it's out of print. But, even with the Da Capo 1993 paperback reprint, it is.

Leonard Feather was a British boy who apparently taught himself to play piano, listening to all the early jazz he could find, and his love of the music took him to the States in 1939 (not, on balance, the worst year a Briton could've chosen to emigrate, even if not a jazz fan). He soon became one of the most prominent of jazz reviewers, critics and historians, as well as a minor composer (more of Feather's songs were covered more often than, say, Steve Allen's) and performer (my own major primary exposure to Feather the composer is through the Langston Hughes jazz and poetry album, Weary Blues, where half the album is Hughes backed by Feather and his one-off band, the other half by Charles Mingus's group--yes, of course this is out of print as well, insanely). Feather became co-editor of the sadly vanished jazz magazine Metronome (JazzTimes kind of holds its place these decades, or Cadence) and Feather gained both the envy and the slightly aggrieved respect of fellow jazz writers by striking a deal with a number of labels...the going rate for liner notes on jazz albums was something along the lines of $25 each in the 1950s; Feather reportedly offered several labels a package deal, wherein he would do all their albums for a flat $15 each...if indeed he got all their business. Which, for several labels, for a while, he did.

But this might be his first masterwork, reasonably comprehensive and strenuously attempting evenhandedness in its assessments of nearly all the important players in the jazz world from its beginnings up through the end of the 1950s (before his death in 1994, he would produce two more volumes as supplements, covering the 1960s and 1970s) and even providing contact addresses (one almost blanches at the thought of all those home addresses being provided in these post-John Lennon, post-Selena days) which might or might not've helped with getting at least a few gigs for the still-active artists. That's the bulk of the book, which is led off with several appreciative forewords by Ellington, Goodman and the CBS Records guy John Hammond (as opposed to his son the musician) and several brief but informative essays about the nature and history of jazz. The back of the book offers several more specific supplementary texts, including Gunther Schuller's essay on jazz, classical and therefore Third Stream music, and the "Blindfold Test," which Feather brought over to DownBeat magazine after Metronome folded where it continues in his memory (JazzTimes does something similar, "Before and After").

Still a valuable resource, long after the home addresses have been made rather inutile except for pilgrimages... 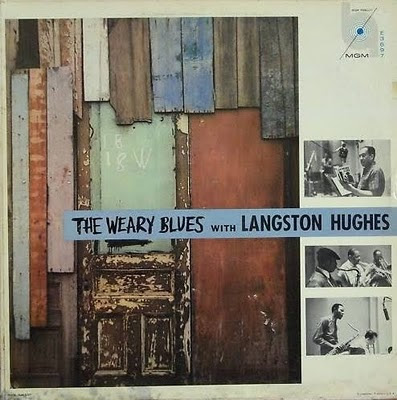 I have this volume, or did at one time, I'm not sure if it's still in a box somewhere or simply gone. I wish I had that Hughes album, but do not. I used to read Feather's column is whatever jazz monthly he wrote in and of course his blurbs were ubiquitous on jazz LPs for many years.

The Hughes album is pretty solid. Feather's "Blindfold Test" ran in DOWNBEAT with him conducting it for more than thirty years, and, as noted, continues even now (I think it's Dan Oullette setting up the blind listening booth these years).

This would certainly come in handy for me. I truly don't understand jazz once it moved beyond its early roots. I really do need a recognizable tune to enjoy it.

Jazz has been my favorite music since the 1950's. For many years I loved bebop played by such muscians as Charlie Parker, Monk, Bud Powell, Dexter Gordon. I remember Leonard Feather liking this period alot also in his books and DOWNBEAT.

Now, I would have to say I like avant garde jazz the best, as played by Cecil Taylor, the later John Coltrane, and the European avant movement. I had a friend who lived to 88 but he never could move beyond Dixieland and swing. Once bebop started in the late 40's, he was completely lost and had to have a tune to follow.

Clearly, Walker and Patti, you need to go to all the same concerts. Not all early jazz followed its base tune, nor is all post-swing jazz free of melody, by any means...part of what led to free jazz, after all, was the re-integration of collective improvisation by the likes of Gerry Mulligan and Art Farmer in the pre-free recordings of the '50s...and the European free players and the likes of Air (not the briefly popular rock band) and Oregon helped establish the frequently very melodic "chamber jazz"...I came in mostly with the Third Streamers, so it was pretty easy to take on and accept the range of jazz, though I probably like the duller sorts of fusion, which sound to me like thinned-out versions of free jazz or like slightly less soporific bad jam-band music, the least. Even the best bands in the mode, such as Return to Forever and Weather Report, are good or better but don't move me as much as jazz in other modes.