Tuesday's Overlooked Films and Other A/V: HIGH SCHOOL (1968) and some TV notes... 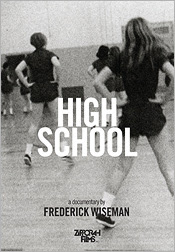 High School, Frederick Wiseman's 1968 follow-up to 1967's mental-hospital/human warehouse cinéma vérité Titticut Follies, is almost as nightmarish (the Philadelphia school board made what Wiseman refers to as "vague noises" of lawsuit, and settled for Wiseman agreeing to it not being screened in Philadelphia or suburbs...which, as it happens, continued to be the case till just before it was presented on PBS as an episode of the POV series in 2004). Filmed at the large and theoretically prestigious public Northeast High School in Philadelphia (still largely "racially" segregated as late as 1968), it manages to gather examples of petty cruelties and gross distortions offered in the name of education and discipline, small glimmers of hope here and there among the students and faculty in the sea of perfunctory if usually well-meant, negligent going through the motions. I first saw it while attending a pompously, would-be slightly progressive private high school in Honolulu, and was struck by the similarity of the institutional experience a decade and change later, not the message, I suspect, it was hoped I'd take away.

The students seem largely alienated from their coursework and teachers, chivvied by martinets among adult hall monitors and other disciplinarians, marking time and awaiting their fates (one discussion between a young returned Vietnam vet and a teacher about who among recent graduates became a casualty of war to one degree or another certainly is among the most chilling offhand bits); the more enthusiastic of the kids are often engaged in such Time-Honored Good Fun as bizarre transvestite mockery of cheerleaders by cheerfully misogynist sports-team members, which leads off this clip, segueing into a sex-miseducation session for the boys by the kind of male gynecologist who almost perfectly sums what's wrong with certain aspects of his era (and that he's in the educational position he's in is both unsurprising and flabbergasting):


Even a few seemingly hopeful signs prove misleading at closer inspection, such as the near-juxtaposition of an older teacher rattling off "Casey at the Bat" humorlessly (and to kids several years older than might be the ideal target audience for even a good reading) as an example of Instruction in Literature with this, a younger teacher hoping to Reach the Kids with the self-conscious, kitsch lyrics of Paul Simon's "The Dangling Conversation," the substitution of a contemporary mediocrity for a "classic" one:


Some of it is simply too perfect, such as the Frank Rizzo-wannabe administrator telling a boy, who is protesting what he sees as being singled out for excessively harsh punishment, that the Mark of A Man is the ability to Take Orders. The engagement of some of the kids in a special program, where they get to work with astronautical gear, simply highlights how thoroughly most of the rest of what they face fails them, and therefore everyone. And in most inner-city schools since and not they alone, that kind of institutional failure certainly has not been reversed, certainly not to any sufficient degree. A sequel of sorts, High School II (1994), is about one inner-city program that is trying and to some extent succeeding in succeeding with very disadvantaged students, instead.

Available on DVD from Wiseman's own label...a bit steep, but perhaps your strapped local library can be encouraged to consider it, or get a loaner from another strapped library.

Meanwhile, as the larger networks in the US do their annual dance for sponsors, the "upfronts," there's remarkably little that's too remarkable about the upcoming season in the US...even if two "period"/historical dramatic hours are clearly inspired by the little-watched, passionately-loved cable series Mad Men: NBC's The Playboy Club and ABC's Pan Am (CBS had already tried their luck with this kind of thing with the summer series Swingtown a couple of years back). Like the CBS entry, they hope to combine the nostalgia with prurience, as much as one can get into that on broadcast tv, and perhaps gain at least the kind of audience that was able to sustain the slight Las Vegas series for several seasons. Comedian Whitney Cummings is deeply involved with two different sitcoms on two networks (she stars in one); Chelsea Handler has one based loosely on her alcohol memoir...I foresee that none of them are likely to hang around long, and that might even be a pity if they were allowed to break out of typical sitcom tropes (which at least the pilot of Whitney isn't).


Antenna TV and This TV, the digital broadcast networks that sprang up in the wake of Retro TV, continue to offer an interesting (though not always watchable) mix of older films, to supplement particularly the awful array of old sitcoms on Antenna (All in the Family being one of the few bright spots there, while Maude, Sanford and Son, The Monkees and Too Close for Comfort are as good as that network gets otherwise), with This mostly plundering the MGM vaults and Antenna the Sony/Columbia (hence, of course, endless piles of Three Stooges), but it is fun, in a way, to see such things as the Ziv TV syndicated staples Sea Hunt and Highway Patrol again...and note how, if sometimes backhandedly, feminist those Ziv series were...the women characters are rarely fragile flowers, whether heroines (under attack, since the stars were usually all men) or villains, such as the female gang member plugging away as energetically if ineffectually as her male counterparts at the Highway Patrol in one episode I caught recently. 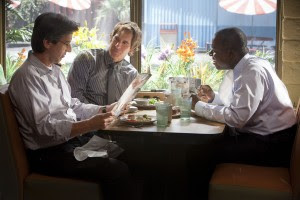 Speaking of our smaller commercial broadcast networks, Ion TV (founded as Pax, and extending their little pun by referring to themselves as "positively entertaining") will begin broadcasting the second season of Men of a Certain Age tonight at 10p ET...as cable series continue the long march onto broadcast tv, as repeats as well as in sharing partnerships. As someone who's been missing this series since jump, I might well give it a try this way...though I suspect Ion might be more sensitive to language matters than its cable home, TNT, is. You might not have a This TV or Antenna TV affiliate too nearby (though you probably do) but it's hard in the US to not be within antenna or cable distance of an Ion station.
Posted by Todd Mason at 5/24/2011 08:30:00 AM

Don't think I ever saw HIGH SCHOOL. Have to look for it. This was two years after I exited H.S. so it will probably feel familiar.

As I note, it felt fairly familiar a dozen years later halfway around the world in a large private high school (or in the New Hampshire public HS where I started). But it'd look Very familiar, I'm sure, even as a Catholic school grad.

Docs about large, suburban high schools make me glad I went to a small town school with a graduating class of 52. The education may have been lackluster, but not dehumanizing.

And urban. As my (and I believe Patti's) private HS was and is. Though my brother went to a suburban HS in the DC area that dwarfs Northeast and Punahou combined...and with barbed wire around the perimeter.

Not sure I could bring myself to see this, as hopeless as I feel about education in this country and as bitter as I am about my own high school experiences -- and I had it a lot better than others, albeit at the school grinding out better autoworkers for tomorrow.

As did I, particularly at the school so proud now of having a US president among its alums...and the one with the excellent library. You might want to take a look at the more heartening HIGH SCHOOL II, instead.