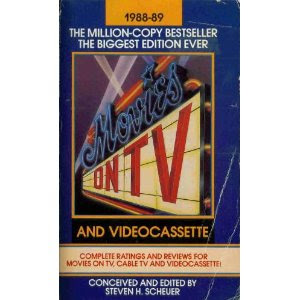 Steven Scheuer, television reviewer and historian and chat show host (most durably, oddly enough, for the public-broadcasting series All About TV, which changed title to World: Comm in its last episodes), was apparently the first to produce a volume of capsule reviews of films appearing on television, with the first edition of this Bantam Books stalwart appearing as TV Movie Almanac & Ratings in 1958, and the last edition, as Movies on TV and Videocassette, in 1993. Young film geek Leonard Maltin gained his early career in part by putting together his similar TV Movies volumes for Signet/NAL, in imitation and as an attempt at improving on the model of Brand X, starting a decade later (after Maltin had published his own film fanzine for a couple of years to help demonstrate his competence for such a gig), and the Maltin book of course continues to receive updated editions. But while Maltin strove to give more information in most entries than did Scheuer, and perhaps was a little more free with the snappish description of what he tagged "bombs," the approach of the two series was and is rather similar, and it was useful to have volumes of both during the 1970s particularly to weigh against one another as guides, and to see which films were cited in the one that weren't in the other. 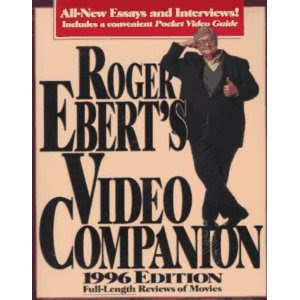 I've been reading a fair amount of "vintage" newspaper and magazine film reviewing over the last month or so, and so have discovered that every bad thing ever said or written about midcentury primary New York Times film reviewer Bosley Crowther was richly deserved (not a complete dunce, but entirely too close for someone in his position), and generally that the most widely-read reviewers in the field in those decades were often a pretty undistinguished lot, particularly when compared to my earlier exposure to the likes of John Simon and Harlan Ellison and Pat Aufderheide. I've always had a less than thoroughly positive experience with Roger Ebert's critiques, certainly, despite both his obvious love of film (and his various activities to help popularize film festivals and general geekdom/appreciation in the field, not least his protean television series) and his status as a literary sf fan and infrequent contributor to the fiction magazines (Ted White published a couple of Ebert short stories in Fantastic and Amazing SF in 1972)...and certainly, over the last decade, he's been fighting a lot of personal health crises with every evidence of courage, grace and wit (between them, he and his old reviewing partner Gene Siskel have not been the most physically lucky of public figures). I just wish I liked his reviews better, for the most part, even though they, too, are much better than the likes of Crowther's on balance, and of the two too-young recipients of the Pulitzer for criticism at the turn of the 1970s, Ebert's award is slightly less puzzling than that given to Washington Post television reviewer Tom Shales. I picked up a copy of the 1996 volume of the Ebert Video Companion, which was conveniently to hand, to see how it would strike me.

About as much a mixed bag as I suspected it would. While I mostly agree with his positive assessment, and more importantly how he arrived at his positive assessment, of the charming if slight and somewhat improbably arrayed Before Sunrise (the decade-later sequel, Before Sunset, is a more mature similar work in every way, and beyond the obvious), Ebert appends a somewhat goofy tag from his mailbag, in which a law student who engaged in a similar experience to that of the film's characters found himself expelled from law school for lying about why he'd missed classes, with Ebert making a journalistic effort to get to the bottom of this rather fey incident. Moderately amusing, in context, and not actually harmful, but rather off-point in a book that could actually have offered another film review in that space. More offputting to me are the occasional clumsy bits, perhaps driven in part (as George Kelley is not alone in making this defense of Ebert and his colleagues) by the daily grind a newspaper reviewer can face, such as this sentence from the justifiably irritated review of Basic Instinct: "[Sharon Stone's character] is a kinky seductress with the kind of cold, challenging verbal style many men take as a challenge." Now, this is as much the fault of a theoretical copy-editor as Ebert, perhaps, and a small matter (though hardly unique in its challenge to even the casual reader); less forgivable is Ebert's consistent citation of the arbitrary, manipulative nature of the Joe Esterhaus script in this post-daily review, with particular harping on the clumsy trick ending...which Ebert nonetheless makes a point of not revealing, not even with a "spoiler alert" or other less blatant device, since he has done his best to get the reader wondering how egregiously bad it can be...and then leaves the reader with the options of forgetting about it, or seeking out and sitting through the film (or fast-forwarding, I suppose). Also attached is a rather leaden bit of business about Ebert chatting with fellow film reviewers about the excised 45 seconds from the film that MPAA demanded to change its US rating from NC-17 to R, where Ebert attempts to be humorously coy about the nature of the act portrayed, and doesn't quite succeed. Worse yet, he can suffer attacks of Auteurism in which a fiction-writer particularly should know better than to indulge, as with his review here of The Color of Money, which makes several at least interesting points about the failure of the film while at no time acknowledging that it is an adaptation of the novel, as the film it sequels was also an adaptation of a novel, by Walter Tevis, and the points Ebert is trying to make would only be strengthened by taking that fact into account (his critique would also be strengthened by noting the aggressively inept performance by Tom Cruise in the film, Cruise [never worse that I've seen] almost in couch-jumping mode and the most obvious reason for the failure of the film, but that is much less a matter of omitting useful and pertinent fact). And even the generally well-done critiques, such as that for Badlands, just don't rise to the level of perception and discernment that, say, James Agee's similarly brief reviews do (or, specifically, Simon's comparable review of Badlands). One can do worse, and frequently, I have had the sense over the years Ebert could do better...though sometimes, it's more that he's been given way too much credit for already having done better. (And not alone in this, either...eh, Ms. Kael, Mr. Sarris, and not a few others?)

I actually had Ebert's brick-sized paperback companions. Now, the reviews are online and I've gravitated to Ebert's longer essays in THE GREAT MOVIES series.

Bosley Crowther was a film critic for the NY Times for 27 years, 1940-1967. Though he was a big supporter of foreign language films, his reviews of genre films like westerns and detective movies, often read like he simply did not understand or love movies. Many of his critical comments just seem wrong to me.

For a long time I too bought the Movies on TV volumes. Now I usually consult the Internet Movie Data Base(IMDB.com). There are errors but they provide alot of information that is not available anywhere else.

And Crowther's comments on foreign films and domestic films that tried to be contemporary mimetic art weren't particularly deep or insightful, either, and he wasn't above a pointless or wrongheaded rant.

Yup, lots of databases these days. May a thousand flowers bloom. I do keep copies of Scheuer and Maltin books, however.

As far as reviewers go, I don't especially want their analysis. What I want is to know whether I want to see the film after reading the review. One saving grace of Siskel & Ebert was that I got that information. Unfortunately, no other of Ebert's partnerings has proven as effective.

Well, it sounds as if you want synopses. I think you should check out the British magazine SIGHT AND SOUND sometime...where they provide a synopsis and then an analysis in two separate text-masses in their film-review section...sadly, Ebert has difficulties working his old format...his recent syndicated show on public television featured two younger reviewers doing the talking...