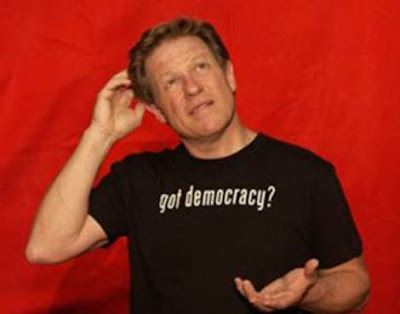 Jimmy Tingle's American Dream is being offered to public television stations in the US this summer by the syndicator Executive Program Services, in a slightly shortened edit that might compress things a little further than the original did (but I suspect that they were pretty compressed even at the full length--industry standard for US pub tv is 56:46 for an hour slot, while IMDb currently reports that the full cut is estimated to run 70 minutes, but neither format has been released to the public yet).

The pretty smooth rough cut for the tv version has brief interviews segments with a number of Tingle's friends in the comedy (Janeane Garofalo, Bobcat Goldthwait, Colin Quinn, Lewis Black, Mort Sahl) and political commentary (Howard Zinn, Robert Reich standing next to Al Franken, such less likely folks as Sean Hannity) industries, as much as those can be teased apart, along with activists mostly from Tingle's native Boston, Robert Altman (these are probably among the last interviews with Altman and Zinn) and (appropriately enough for a 7 May viewing) Tingle's mother, Frances Tingle. We get to get a quick sense of what these folks, and less well-known New Hampshire and Boston folks (including one homeless multi-state wanderer) think of as The American Dream, and discussion of how we are and mostly aren't able to get much of a shot at what might be our own version of that dream...along with a quick run through Tingle's own career as political comedian, starting in the early '80s and having fairly prominent placement in Big Media (as the humor commentator at the end of 60 Minutes II broadcasts during that series run on CBS-TV, and the five years Tingle ran his own comedy-oriented theater in Boston; then, as he chose to close that, going on to get a Masters in public administration at Harvard, in the Kennedy School, and giving a commencement address upon his graduation...and talking about bonding with his son, Seamus (despite giving him that name in the States; the similar "James Tingle III" might've been less likely to invite classmate hassle). It's an amiable and informative hour, about Tingle more than about the notion of The American Dream, but perhaps because that isn't a concept that resonates much with me, as opposed to The Human Reality we all face in one way or another...but you're more likely to glean new information (and some decent jokes, in segments of his standup routines) than you are likely to find too much new in the definitions the assembled offer. And the story of how Seamus got a ball at a Sox game is not the only charming anecdote. Look for this one to pop up on PBS and independent public stations in June, and Tingle is trying to put together a comedy tour to work around the local broadcast clearances.

I don't go out for live performance nearly often enough, but I lead a busy, tiring life with many little tasks going begging at any given time. But when I learned LA-based Eddie Pepitone was going to be performing at a small club, Connie's RicRac in Philadelphia as a part of a series of standup shows put together by Corey Cohen, I decided to make the effort (Pepitone is one of the quartet of regulars/hosts on one of the podcasts I listen to regularly, The Long Shot). Connie's is set up a bit like a railroad apartment...it's a long, narrow (for a club, wide for a hallway) straight shot from the front door, past a functional if limited bar and to an area where stackable chairs can be set out, as they were, a couple of scraggly couches at the front of them, and a low stage and resizable backstage behind that. A local comedian opened for Pepitone; he mentioned, apparently in earnest, having a very bad time trying to get to the club, which seemed to throw him off a bit, and his set was notable for a little too much self-deprecation (to the point of self-sabotage), and a mixture of patter and formal jokes that weren't actually finished...he'd start a formal joke (paraphrase: "I took my kid to see the most recent Pixar film") and then further the setup ("and some of the parents there were, like, 'Shut up and sit still!' to their kids") and he seemed to think he'd actually finished a joke thus. But he was game and amiable.

Pepitone was both game and amiable and also a little overwhelmed by his day, but while also a bit self-deprecating ("You're all disappointed, aren't you?"), had more resources to draw on; his persona, as I told Alice who came along with me, is a bit like a Don Rickles who is much more interested in insulting himself than members of the audience (though he doesn't spare targets that actually do spark anger or resentment in the larger world, particularly the political and performance arenas). He'd taken the train down to Philadelphia in the afternoon, from visiting old haunts in New York City, and had spent about five or six hours walking around the city, taxing himself more than he had planned, but at least that allowed him to note to his amusement how many streets in Center City are named for nut trees. Paraphrase: "Chestnut, Walnut...but you don't have any Peanut Street, do you?" He worked up a routine about having a heart attack and not being able to distinguish which nut street he was one while desperately instructing the 911 operator on his cell phone (he wasn't yet aware that one of the two closest hospitals is just off Filbert, actually). Pepitone, who is more a dramatic than typical standup comedian (along with starting out in sketch-troupes and experimental theater, he has done a fair amount of relatively non-comic work as a television and film actor) eventually found his rhythm in a routine that has frequently worked for him in his longer sets, wherein he wanders out into the audience to heckle himself; he rang a lot of funny changes on that concept. Both Alice and I enjoyed the gig, and were glad to be able to say hello and good show to him afterward, but didn't get to say much else, as there seemed to be a number of old acquaintances and/or fans, at least, about, also hoping to get a word.

Russia Today, or RT, the 24-hour English-language Russian news and documentary service, is becoming increasingly available to US and other Anglophone viewers around the world, and is amusing for how thoroughly it dances to the Putin/Medvedev Administration tune. No chance to mock US government policy is passed up, if possible, and while I don't necessarily disagree with most of the critique presented, it's notable that similar overtures and actions by the Russian government are, oddly enough, not held up to the same level of scrutiny. The enemies of Russia are unadulterated villains (Chechnya comes in this wise a Lot, including international sympathy for Chechnyans), the current unrest in the Arab nations is clearly a US plot, or at very least was fomented with great US involvement, and the inequities of American society and particularly US foreign policy are consistently highlighted in a way that one will not find on, say, Al-Jazeera. My friend Laura, who is a paleoconservative aligned in most ways with the policies of Ron Paul (she might be a little closer to Pat Buchanan than Paul is), notes that RT seems unusually friendly to her kind of politics, among media organizations, which seems odd in that the Putinoids are not exactly the Russian correspondent to the Tea Partisans; only seems natural to me, given that the Paul and Tea Party campaigns must seem both disruptive to US politics as they are and also at least leaning isolationist and non-interventionist...less competition for Russian bullying in the world arena is certainly likely to be sexy to the current Russian regime.

The Gobetweenies is a terrible title for a decent new sitcom on BBC Radio 4, which will have a relatively short run of four episodes (at least in its first "series"/"season"); a rather clever look at the adventures of a family working out the custody swaps of two children between divorced parents played by BBC veterans Sarah Alexander and David Tennant. At least Marcella Evaristi's pilot script was deft, and I'm looking forward to the balance. 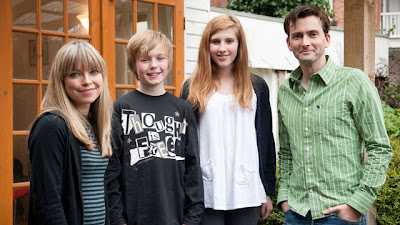 I'm dysfunctional-familied out. I understand 50% of U.S. marriages fail and broken families have become the norm. But too many of the TV (and radio) dramas cover the same ground.

I'll have to give it a try, if only for Alexander and Tennant.

As I say, the first episode, at least, is funny enough.

Much better in its focus than, say, PARENTHOOD is in its...despite PARENTHOOD having a fine cast, as well.