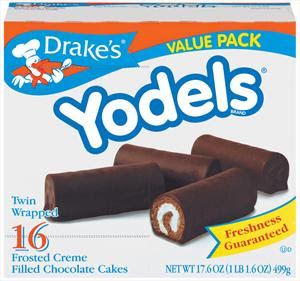 And, frankly, these things make it easy to not eat them. [And, as of late 2012, the corporate management of Hostess, which had been plundering their corporation while whining endlessly about unions which demanded their members not be fired, from what the directors would insist were redundant jobs...and surely the management had absolutely none of those among its vice presidents in charge of golden-parachute rigging...made sure the option of eating Drake's or Hostess or Dolley Madison cakes has not been available, by shuttering the business.]

Drake's Cakes and Hostess Cakes are made by the same folks these days, Intercontinental Baking (which is trying to phase out the Drake's brand in favor of incorporating the Drake's products into the Hostess line, as they did previously with the [oddly, traditionally even worse] Dolly Madison line of snacks)...and one of their major competitors is the discount snack-baker Little Debbie (aka Little Debris among those who've forgotten how similarly bad most Hostess cakes are in comparison...Gross-test, as they have been infrequently referred to in my ken). Drake's products are and have been consistently better than their corporate sibling's through the decades, as Hostess has consistently been willing to use lard in such products as Twinkies, and generally just chooses to make a lesser product...and that's certainly true here, where among the three cake and cream twists, the Hostess product is actually the worst of the three (despite costing as much as the Drake's, and roughly twice as much as the Little Debbie). The cream and cake in the Hostess was the blandest and the least chocolate-flavored (though the LD was close in the lack of cocoa or substitute flavoring); the Hostess was a bit crisper in its theoretically chocolate coating than the mushy LD, but not as crisp as the Drake's. The Drake's was easily the most flavorful as well as having the best crispness and "mouth-feel," while not being up to the quality of contrast of their Devil Dogs (essentially a non-coated devil's food "sandwich" with cream filling) or Funny Bones (a coated devil's food cake with a light peanut-butter filling). The Little Debbie, by flavor if not texture and relative lack of expense for what's at best a mediocre product, is certainly a less ridiculous choice than the Hostess; the worst that can be said for the Yodels is that, like most Drake's cakes these years, the cake part of the roll is a bit dry.

But none of these products are up to the work of a genuinely good bakery, nor up to the best of the Drake's line (even now, much less what Drake's was producing in, say, the 1970s)...even Little Debbie's peanut butter/chocolate cookies are a bit better. I'm not sure Hostess manages anything better these years, since I won't eat lard (they have managed to not put lard in Ho-Hos these days, perhaps so that they can manufacture them with the same equipment used to make Yodels).
Posted by Todd Mason at 5/19/2011 11:45:00 AM

Tastykake blows them all out of the water.

I'm rather partial to the Little Debbie Oatmeal Creme Pies (can't eat 'em anymore, thanks to big bad gluten). You should check out the T.W.I.N.K.I.E.S Project -- tons of fun for a rainy day: http://www.twinkiesproject.com/

Why, thanks backatcha, WeightWatchersBoy Brian (their brand of cakes is acceptable, falls to the middle)...since Drake's aren't quite as excessively sweet as TastyKakes, although TK mostly ranks second in my estimation among package cakes (Entemann's run a very close third, if not second). And since TK has just been taken over by the Little Debbie-ish "Mrs. Freshley's" people, we'll see if the quality will be kept up. (TK makes no equivalent roll, hence no entry in this entry...Freshley's might, but I didn't see it at the supermarket last night.) I don't have nearly as many Drake's cakes as I would like, and far more than I ever should...but not too often.

More unalloyed thanks, Bonnie, for your tip (and the LD Oatmeal Pies are a little worse, and a Lot smaller, than they were in the '70s, but pretty similar and I'm sure glutenous as hell).

Revolting! I'd take chips any day over all this sugary stuff.

You are fortunate, then, in not inheriting the Sweet Tooth. I have the Salt Tooth (the Salt Lick? the Salt-Lick Tongue?) too. (Which is to say the outsized lust for both.)

Can't stomach the Little Diabetes cakes -- that polyvinyl chloride they paste on the bottom of each one is a severe put-off. I still have a great fondness for Drake's Devil Dogs, although they seem much drier than when I was a kid. Every once in a while a Hostess will call to me, but with a hollow, false, and treacherous voice.

wv - "terfood" = not only did they misspell it, but they forget the extra "d"

Mmmmm. Polyvinyl chloride...if only that came with MSG.

Yes, as I mention, all the Drake's line of cakes lean dryish these years, in both senses of the word...though that usually makes for a nice counterbalance to the fillings. The pies don't have this arguable flaw...no one beats the Drake's pies (that's one area where TastyKake products tend to be distractingly dry, in the pie crusts).

Ah, well...back to the sugar-free snacks...or, even, this remarkable bit of business, "fruit." (I suppose I could've waited till I found some Royal cake rolls, but I suspect they are of a piece with LD, if not actually LD products under another brand.)

Yes, unsurprisingly, Flowers Foods, the company that has just bought out TastyKake, and which already manufactured Mrs. Freshley's products, was also, at least latterly, the source of Royal Cake products, so going head to head with LD in the discount market. Flowers also owns Sunbeam Bread, Nature's Own, and Holsum.

As it turns out, McKee, the Little Debbie corporation, has now bought Drakes, and Flowers Foods has bought Hostess/Dolley Madison, from the corporate wreckage of the management-plundered Hostess Brands.