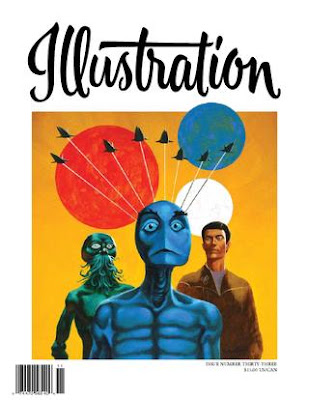 Just reading the Gaughan article in Illustration...and I will be picking up that book sooner rather than later.

I note a reference to the sf-magazine field shrinking to F&SF, Analog, Galaxy and Amazing (the latter two staggering), and the advent of Asimov's, by the end of the '70s...Fantastic actually was still getting by till a ways into 1980, and my finances also were taxed a bit by the shortlived Asimov's SF Adventure, the Asimov's Anthology magazine Davis was also publishing, and Destinies, albeit the last was usually purchased by my father and I'd read his issues...we couldn't find Galileo too often, but it was still around, too. [I suppose it's almost a cheat to cite Destinies, since it was a paperback magazine, in the manner of Perry Rhodan or American Review...this being one of few sentences ever to wed those two periodical books.]

Of course, I was also picking up Whispers and Short Story International and the crime-fiction magazines as I came across them, so it seemed like a fuller market. 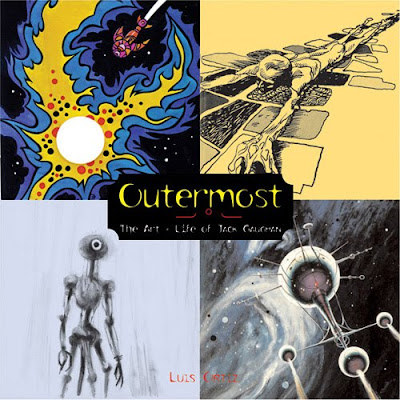 What wasn't in the note to Luis:
I didn't get to see all the little magazines in those years, in sf and fantasy as well as eclectic titles...it would take until the '80s for me to find the back issues of Evergreen Review, as I've mentioned here, and Triquarterly and all, but it was always a thrill to find a new project had arrived on the newsstands to supplement my steady diet of my subscriptions to The Atlantic (a better magazine in 1980 than it is today, and one with a short story or two in every issue, much as Harper's and The American Scholar essentially still provide today, though the last has only recently added fiction to its mix...perhaps in response to the Atlantic essentially dropping fiction) and Alfred Hitchcock's Mystery Magazine (I had bought a cheap 3-year subscription in 1978, but didn't approve of the post office's depredations upon the mailed copies, so usually bought everything else off the newsstand) and the others...such as when Twilight Zone Magazine popped up in 1981, albeit the first issues weren't Too impressive...but the lack of Fantastic left a hole in the heart, and there were some good portents about TZ (and its shortlived companion, Night Cry) that would prove out over the next eight years.

Omni and Heavy Metal, where Ben Bova of Analog and Ted White of Fantastic and Amazing landed, respectively, had some attraction, but not enough to keep me engaged and buying them regularly...and there was enough about both even at their best to turn me off (for every good short story, a credulous UFOlogy piece in Omni or some of the duller comix in HM). Also, the paper and ink Omni was printed on and with would smear with the slightest touch...very annoying (you'd think the Penthouse people, who published it, would know better)(or perhaps that was a bit of planned obsolescence...brings one back for another copy). 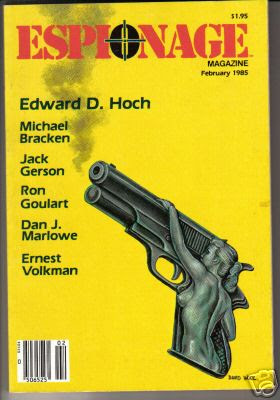 The terrible covers on Espionage didn't help. The Writer's Digest folks being behind the revived Story certainly did help that magazine's distribution profile. 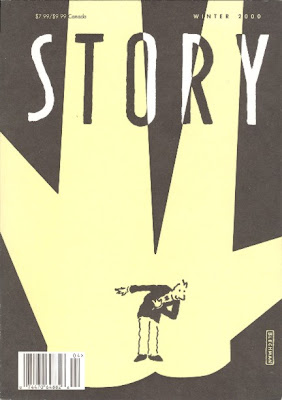 Aboriginal SF arose eventually out of the ashes of Galileo (the latter folded in 1980, the former began in '85), and the horror paperback boom meant that some of the horror little magazines, such as Weird Tales' newest revival and Grue, could find some rack space on the bigger newsstands, along with the revival of Story, and such projects as Espionage and the Black Mask periodical book...and the insurgence of the big box bookstores at the turn of the '90s gave more little literary magazines more access to newsstand browsers than they had been getting...probably more than they had ever had gotten, outside the best newsstands in New York City and a very few other places.

Ah, well, enough nostalgic ramble for now. But Jack Gaughan, whose best work isn't quite represented on the covers above--though is on display inside Ortiz's book--can do that to me (I think this cover and this, and they not his best--buy the book, or at least read the article!--are more representative of what he could do). That, and a long week not improved by the day-long Blogspot crash.

Thanks for this posting. I was not familiar with Illustration but I obviously should be.

Gaughan’s covers were always bright and distinctive and I almost always liked them. The only color picture in the article that I actively dislike is the one for “The House by the Crab Apple Tree” on the February, 1964 F & SF. I don’t much care for the Dr. Bloodmoney and Cap Kennedy covers either, but I don’t think they’re bad, just not so much to my taste. I remember thinking that his interior illustrations were fine but then became more inconsistent when he became the illustrator for the UPD magazines; the article has let me know why that happened. I always thought that Gaughan was the perfect illustrator for Jack Vance.

I have Luis Ortiz’s Emshwiller book and would recommend it. Owning the Lee Brown Coye book was no temptation to me, since I rarely liked his work. It would be nice to have the Gaughan but the price might keep me away.

Yeah, I have the Coye and the Ed Emshwiller (and the cult magazines volume and the Silverberg)...will be picking up the Carol Emshwiller collection, too.

Indeed, I think the only choices I'd actively argue with are those made for the book's cover...I think they just don't make for compelling enough a cover together.

The F&SF cover is a bit of an odd duck, and I wonder if it isn't a detail of the larger painting (for fear of giving away too much of the story, with is one of those desperate to shock us).

Todd, we seem to have been buying the same magazines. I think I bought every magazine you mentioned including ILLUSTRATION and the literary magazines.

I'm afraid we will live to see the death of the fiction digests. EQMM and AHMM seem to be doing better than the SF titles. However ANALOG, ASIMOV'S, and F&SF, have really low circulations. Like 30,000, 23,000, and 15,000, respectively. It wasn't too long ago that these magazines were within reach of the 100,000 mark, which has always been considered a healthy goal.

We might, Walker, see the end of the digests, but I suspect instead we'll see the migration of them to all-electronic formats, as with SUBTERRANEAN or such sites as Tor.com and Baen.com. Meanwhile, ASIMOV'S in the late '70s was able to get up to about 100K, where ANALOG had peaked, but both were slumping PDQ (and F&SF at its height in the '70s floated around 60K...GALAXY had a brief spike up to about 80K, after the merger with IF and presumably the inclusion of its subscribers; EQMM traditionally outsold AHMM, though they traded places briefly in the Dell years, in part presumably because, as with ASIMOV'S, Hitchcock's name was more widely known than Ellery Queen's, as their circulations fell from about 150K for EQMM and perhaps 120K for AHMM in the '70s to around the 30K levels at Dell)...ANALOG after the sale to Davis Publications, which while a good performer in most ways, didn't have the corporate heft of Conde Nast (even if CN never worried too much about ANALOG). Also, Ben Bova's ANALOG was just that much more interesting than Stanley Schmidt's, from jump, I'm sorry to have to say...and I think that's been reflected in the slide of sales. That and Davis actually knowing how to sell fiction magazines, something neither Dell (when Dell owned the magazine group) nor Penny Press (which bought Dell's magazine group and got the fiction magazines and perhaps also the horoscope magazines as What-the-Hell pendants to the puzzle magazines) can also claim, is telling, and has told on those slumps. The collapse of the big box bookstores probably hasn't helped, but might not hurt as much as I fear, except for newsstand sales for even smaller magazines, such as the littles like TIN HOUSE and THE PARIS REVIEW, which are selling in the 5-10K range and managing to get by without institutional support...perhaps that kind of range will be doable for the sf/f/cf magazines as well...it's certainly getting harder to find my favorite titles even at the surviving big boxes (and AHMM, the only mostly-fiction magazine I currently subscribe to ((because I hate getting mail-battered copies)), is remarkably absent from newsstands I see, except for one grocery store's, and that hit and miss).

Several months ago I went through the Trenton, NJ area to try and find newstand copies of the three SF and two mystery digests. Like you, I don't like the mail battered copies with address stickers, etc. Barnes and Noble was the only place that stocked copies of the digests.

When I first started buying them back in the fifties and sixties, you could find copies all over the area but no longer. Distribution is very poor.

You are right about the next stage being the E-magazine and E-newspaper. I've drawn the line however and will go down with the physical, hard copy format. I have a house full of books and magazines, so I have plenty of back issues to read.

We'll see how quickly the tree-martyring (or recycled paper) editions disappear. I suspect it will be a lingering passage.

Yup, magazine distribution has tended to be a very corrupt and inefficient business, and that flies a lot less easily now than it did.