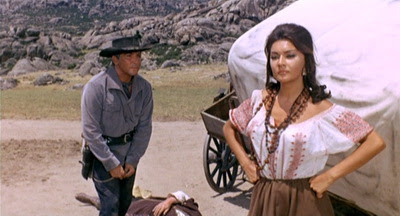 Though director Sergio Corbucci's best westerns would follow this restrained early effort, I was surprised to find myself really enjoying a film that seems as much standard Hollywood as Italian. By contrast, its contemporary, Leone's influential A Fistful of Dollars, really showcased the European style that helped render these films so distinctive. Though not without its own controversies in terms of influence and in your face violence, Fistful greatly overshadowed Corbucci's earliest Eurowesterns.

Minnesota Clay opened in Italian theaters a month after Per un Pugno di Dollari (A Fistful of Dollars). Both movies share the plot twist of a town bullied by two different gangs as would Corbucci's own 1966 Django (which found considerable success in many territories save for the US, where it had no consequential release, and England, where it was banned). Corbucci and his frequent collaborator Adriano Bolzoni reduced the 2nd gang to a hastily introduced and easily disposed of subplot during the course of Minnesota Clay while both Fistful and especially Django made the other gang essential to their Machiavellian storylines.

Minnesota Clay not only had baggage (of its dual Italian/Hollywood influence, in this case) but so does its title character, wearily portrayed by Eurotrash vet Cameron Mitchell (perhaps dubbing his own gravelly voice in the export prints). An unjustly convicted middle aged pistolero/ widower turned-prison-fugitive, he practically rivals the great mute gunfighter "Silence" (Jean-Louis Trintignant from the innovative Il Grande Silenzio, a 1968 western that many consider to be Corbucci's cruellest yet also intensely beautiful genre contribution) as one of the most sympathetic protagonists in this director's filmography. With his fading vision, can Clay prevail against all of his enemies and protect the headstrong daughter who doesn't even know that he is her father? Leone's gunslinger is as iconically mysterious as he is lethally unstoppable but Mitchell is permitted to flesh out his character in a manner that made him less mythic yet more fallibly human, a hardcase who we fear might not succeed in his objectives.

Georges Rivière, veteran of several moody Golden Age Italian gothic horror movies, portays the sly, vicious Fox, Clay's main foil. Typical of the skewed Eurowestern perspective, Fox is introduced as the town's sheriff, dressed mostly in white while Minnesota is downmarketedly restricted to drab dark clothing, displaying the fashion sense of any common Hollywood heavy. Do not trust well dressed or uniformed individuals in these movies. Even as late as the classic surreal 1976 Italian western Keoma (from action specialist Enzo G. Castellari, best known as the director of the original epic Inglorious Bastards), post-War Between the States veterans are shown, in uniform, to be local gang hired guns. The bearded walking arsenal, Keoma (Django's Franco Nero), is shabbily draped in Anglo and traditional Native American clothing like a militant hippie Jesus in a duster who will go onto out-argue Death (Castellari's nod to Ingmar Bergman) and bring some small sparks of life to the apocalyptic ghost towns that he rides through, while also killing plenty of murderous trash and issuing sardonic one liners (a Franco Nero western trademark).
Keoma is probably my all time favorite Eurowestern but it is challenging listening for many a potential fan, thanks to an eclectic soundtrack (westerns of the seventies had markedly different styles of scoring than their more exultantly soundtracked 1960's predecessors).

Fernando Sancho greasily provides menacing support throughout Clay in what must be one of his earliest bandito roles and even Horror Express's future prickly Inspector Mirov, Julio Pena, has a part.

Performers from all over the world, including Asia and potential export box office drawing yankees such as Mitchell, the soon to be revived-from-a-dead-career Lee Van Cleef and the then relatively-unknown Clint Eastwood, would cast their lot in "spaghetti westerns" but production co-financing countries such as Spain, Germany and France were particularly useful in this regard.

Though the direction, editing and choreography of Clay aren't as assured as Corbucci's later efforts, there are some nicely realized sequences (including a runaway wagon setpiece). Some of the less impressive post-sync dubbed gun shots should have been replaced; rival director Leone famously claimed to have utilized rifle shots for revolver sound FX and cannon blasts for discharging rifles, an option not then available to Corbucci.The soundtrack by Piero Piccioni is listenable but was overshadowed by Ennio Morricone's more infectious (and influential) Dollars score. Along with Django composer Luis Bacalov, Morricone would eventually contribute some of the most memorable soundtracks to Corbucci's westerns, including my favorite, the delicate and melancholy score for The Great Silence.

Minnesota Clay is available as a letterboxed stand alone title from VCI and as part of Video Asia's compilation, Spaghetti Western Bible Presents The Fast, The Saved, and The Damned (which includes the bizarre 1971 Blindman, co-starring Ringo Starr as a Mexican bandito--its so called remake, Comin' at Ya!, with the same director, Fernando Baldi, and star Tony Anthony, and featuring Pedro Almodovar's future muse, Victoria Abril, re-started the 3D craze in the eighties, and Massacre Time, a 1966 effort from genre-hopping film maker Lucio Fulci...the most traditional of his three westerns, though the opening Zaroff-style man hunt and various zoomed-in shots of violence show the intensity that Fulci would become internationally known for in his future thrillers and chillers).

Corbucci's participation in movies such as Clay and the dynamic supernatural peplum (Italian sword and sandal) Goliath and the Vampires (US release title for 1961's Maciste Contro il Vampiro) led to his helming Django, whose aesthetically and financially successful coffin-dragging wanderings would encourage the film maker to devote a considerable part of his career to making notable European westerns. Movie fans and scholars would label him as one of the "three Sergios" along with Leone and Sergio Sollima, whose own relevant highlights include The Big Gundown (1966) and its Lee Van Cleef-less sequel, Run Man Run!
Posted by Todd Mason at 5/31/2011 09:00:00 AM