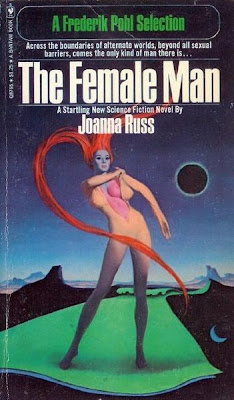 Some week in the near future I'll probably do Russ's The Adventures of Alyx, the omnibus of her feminist time-traveling/sword & sorcery Alyx stories including the novel Picnic on Paradise, or one or more of her other collections of short fiction, since I've already made at least fleeting note of her collections of nonfiction. I think it was Robin Reid who noted that Russ richly deserves her own volume, or set, in the Library of America (and Modern Library...and Viking Portable series...the influence of some of her essays alone might warrant that...) But for today, I'll take on my favorite of her novels, and perhaps hers as well, the 1975 monument that took several years to find an editor willing to publish it, till Frederik Pohl at Bantam saw it and realized its potential (among the other novels he put through at Bantam, only Samuel Delany's Dhalgren sold better in its Bantam run [profiting in part from the publicity about the leeway Delany was given to revise between printings], and unlike that novel the Russ has been in print essentially continuously since).

The Female Man is both a relentlessly satirical and very personal novel for Russ; she doesn't spare herself nor those whom she might agree with in most or nearly every way from critique, nor is it unduly mocking of those she'd find less agreeable. It's the mostly but not entirely linear story of "Joanna Russ" (an avatar of herself, but still, as she was always careful to point out, a fictional construct) encountering in essentially the world of the US in the early/mid 1970s two variations on herself, who were products of rather different societies: Janet, from the all-women society of Whileaway, 800 years after males have been eradicated by a plague, and Jeannine, a typically repressed early 1960s woman from an Earth where the Great Depression never ended, World War II never happened and so the wartime upheavals that helped re-spark the Western feminist movement never occurred. After various adventures in each other's realities, the trio meets Jael, a warrior (possibly) in a time between Joanna's and Janet's, where there is a literal, "hot" war between women and men; Jael seems somehow to have been the catalyst for all four to meet, though the other three find her circumstances in most ways the most disturbing of any of their lives (Jeannine's vying for that sad prize; unsurprisingly, she is least unsympathetic to Jael). 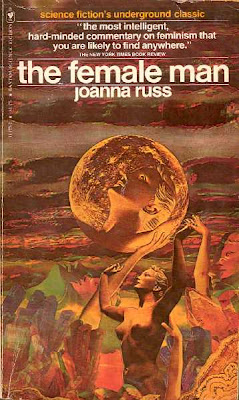 "Whileaway" and Janet had appeared earlier in the famous short story "When It Changed," but the society is more thoroughly worked out in the novel; Janet's job, before being sent on this odyssey through the realities, was essentially that of a cop...one of her primary duties is to find those women who choose to withdraw from Whileawayan society, and if those women refuse to rejoin, to kill them. Thus, the often-suggested notion that Russ is putting forward Whileaway as an unalloyed utopia is utterly nonsensical, particularly as artists (and perhaps most often writers) need to withdraw from time to time, for perspective if nothing else. Janet also finds herself in a taboo relationship with a teenaged girl in Joanna's reality, taboo largely for its lesbian nature "here" and for the cross-generational nature even moreso on Whileaway than it is the Joanna reality...this would be a thread Russ would examine closely again, in contemporary mimetic terms, in On Strike Against God. Russ is clearly fleshing out the many roles we are all cast in, and particularly an intelligent feminist of her time would find herself in, as persevering and not complete victim, pragmatic challenger and emotional wayfinder, warrior unwilling to take anything for granted including the nobility of any warring cause, and observer and synthesizer. The wit and grace with which the threads of the novel are woven together is joy to behold...Russ's clarity and passion and uncertainty in some matters are all laid out magnificently, and there are many threads to pluck...and because of that clarity, the novel is no more difficult to follow, really, than those of Kurt Vonnegut (without as much distancing) or Margaret Atwood or, for that matter, the ones Frederik Pohl was encouraged to write by the example of the Russ and others around him, most notably Gateway.

A brilliant novel, and available in a number of editions, any worth having, even if none of the covers have been nearly up to the quality of the prose...frequently the case in anything marketed as sf, but particularly true in this case, most suffering from one sort of amateurism or another, or puzzlement as to how to market the work. Happily, it has found a continuing audience, just not one as large as it deserves.

For more of today's "forgotten" books, please see meme-sponsor Patti Abbott's blog and please do see my memorial post for Joanna Russ, who died last Friday, after a long life of much excellent work achieved at great cost against a sea of maladies, some more vicious than even the sexism and other chauvinism she challenged so well. (And this timely post.) 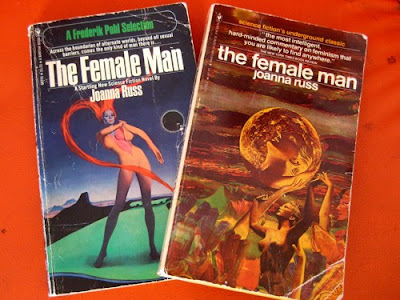 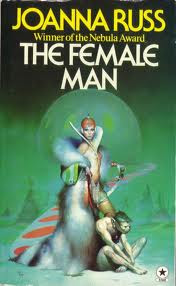 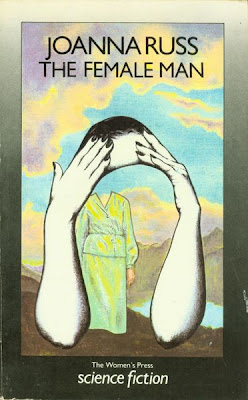 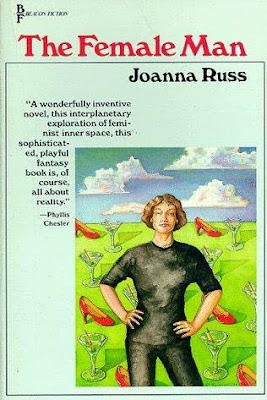 The particularly amateurish Beacon Press (US) cover, even given a good stance for, presumably, Janet. 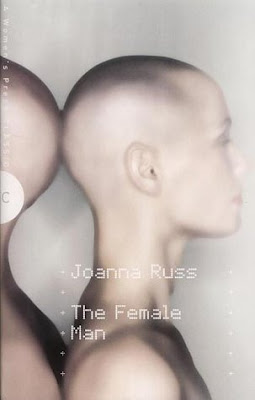 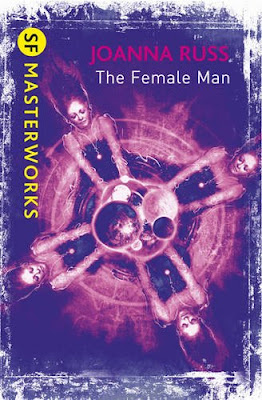 The in-print UK edition from Gollancz. 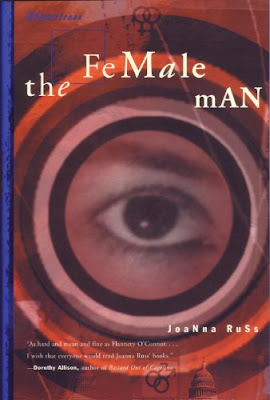 The current Beacon "Bluestreak"-division (US) edition 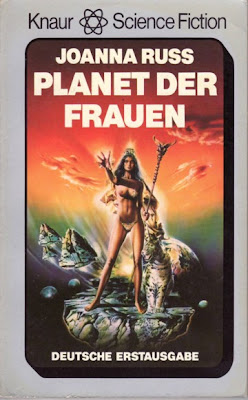 At least none of the Anglophone editions is presented as badly as the German. 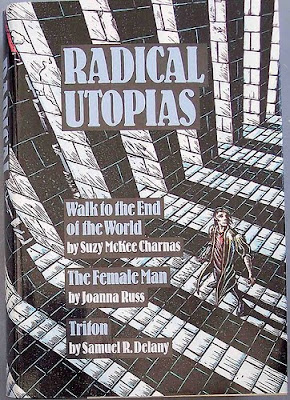 And a Quality Paperback Club omnibus including the novel...which isn't a utopia in any real way, even to its author, nor intended to be, I strongly suspect.
Posted by Todd Mason at 5/06/2011 01:40:00 AM

I can imagine Russ's reaction to that German cover.

Actually, I think the original Bantam cover was iconic. THE FEMALE MAN generated controversy for years!

Both the Bantam covers are better than most of the others, certainly. I read the novel first in 1981 or thereabouts with my copy of the second Bantam edition, from 1978.

Avram Davidson's "laughter with a little bubble of blood in it," I suspect, Jerry...

No one can pique my curiosity about the numerous SF works I've overlooked in my detective & thriller over-immersion than you, Todd. This is a book I eagerly look forward to reading.

Fantastic book: great to see all the covers even if some of them make my head hurt. Nicely done.

John--It's a mutual thing, here...one of the reasons I try to read everyone's entries every week even if I don't (or don't have the time) to comment on every one every week...certainly the antiquities you highlight, and the cozier/more "Golden Age" detection items noted by others, have often gotten by me altogether.

Kate--thanks...it's pretty remarkable the range of Not Good Enough the packaging on the novel has been, eh? From Almost There to What On Earth? You know, I need to read KITANINNY yet...and Russ noted that the only two books Pohl published that made major sales inroads were the two "most difficult" ones, THE FEMALE MAN and DHALGREN...though another that saw print, though not in the Pohl sf line, because of Pohl meeting the author at Clarion was Gustav Hasford's THE SHORT-TIMERS, now perhaps mostly remembered as the basis for the film FULL METAL JACKET.

What I don't know about Science Fiction could just about fill the universe.

Well, Evan, the Universe is full of All Kinds of Stuff we don't know! I take it as a challenge.

Todd, I don't have an email address for you so please let me know if you'd like to participate by emailing me at beauvallet@aol.com. Here is the email that went out to the others this morning:

The rough schedule for this year will be:
Announcement on the blog today (May 8) as well as notices to you five, plus notices to the five finalists from last year
Invitation-seekers -- not you, you skip this round -- to have links to me in one week (May 15)
Theme announced + invitations sent to 10 writers drawn at random one week later (May 22) - at this point you start writing.
All stories to be <=3500 words and submitted in two weeks (by June 5). Winners announced on June 17.

Prize money only slightly better than last year (international winners will be paid via Paypal, so that currency exchange won't be an issue):

For right now, all you need to do is let me know if you plan to participate. If you do, remember that the theme won't be announced until May 22.

Well, Rick, Russ wasn't so fond of labels, either...particularly distorting ones, such as those that make the default for humanity male...hence the Female Men one might find one's self referring to, if incautious.

Also, a story that doesn't say anything about how the author sees the world would be a pretty neat trick. Even when the writer is being satirically self-contradictory, or otherwise not speaking out directly on matters.