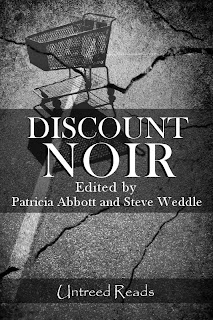 The big doors in the back used to be for bringing things in. The last things they brought in were the refabricators, or so the stories go. You feed things in when you’re done with them and they make new things for you. I can’t imagine what life was like before the refabricators, and the little robots that fix them up when they break down in one way or another. I can’t imagine what it was like to leave the WalMart, or why you’d want to leave the comfortable store to go out into hot air and sere land beyond the front glass. I’ve been out, once, with a crew to help fix the power access from the Plant (I didn’t do much, but it was unpleasant enough).

Apparently all the folks who had a home of their own, in their own little building, who could afford it had their own little refabricators, before the big plagues came through. They and the droughts meant there was ever less folks to want to come to the WalMart. My ancestors, and all the others who live here now, are descended from the folks who were locked in every night…didn’t really have any other place to go.

Some others came to join us, after the plagues but before the droughts got really bad…The crusty punks, carrying forbidden things like beer and adult magazines, so unlike the texts that the Greeters use to teach some of us how to read and write. We still occasionally have the refabricators make us some beer, but it doesn’t taste good to me. The everclear they had and fed in is better, and it only takes a little to have its magical effect.

Once, after I’d drunk some everclear, and fell asleep under the Big Smile, I dreamt that the Big Smile told me that I was the Truly Among the Discounted, The Very Special. It was a very special day, and when I told the Greeter I saw, she patted me on the head and gave me a candy, and said that I should always remember. I always have.

They began to teach me to read, shortly thereafter. The ancient books and magazines kept in the Managers Office, even the forbidden PLAYBOYs, were at my disposal. It certainly was more fun than climbing to the tops of the shelves to dust them off every other day, which was my task before (we carefully capture all the dust for the refabricator).

We wait for the rains to come, so we can put the plants out front, like in the old days. Maybe more new people will come.

(copyright 2011 by Todd Mason. originally appeared on this blog, and reprinted in Discount Noir, edited by Patricia Abbott and Steve Weddle, Untreed Reads)
Posted by Todd Mason at 10/25/2012 09:43:00 AM

Email ThisBlogThis!Share to TwitterShare to FacebookShare to Pinterest
Labels: vignette