FFB: The Encyclopedia of Folk, Country & Western Music by Stambler & Landon; Blues Who's Who by Harris; The Official Punk Rock Book of Lists ed. Wallace & Manitoba 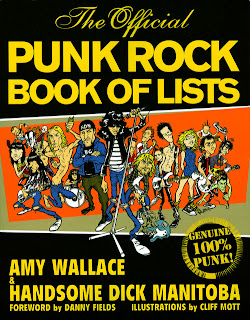 Three of the kinds of books that are becoming increasingly obsolete...even the CD-ROM versions of this kind of book are becoming orphaned technology, as web resources take their place and allow for more and easier revision, input and feedback, and ease of access...and, frankly, because this kind of book rarely sold well enough to make a fortune for anyone, even though the folkie/c&w reference saw three editions over fifteen years and the blues book two over a decade (the latter from different small publishers)...and even though Amy Wallace was seeking, a few years back, to make another career of Books of Lists, even as the first The Book of Lists had been a bestseller as well as family project for her, her father Irving Wallace and her brother David Wallechinsky in the early-mid 1970s. So, obsessives can still compile this kind of thing, and monetizing their obsession is only slightly more problematic than it has ever been.... 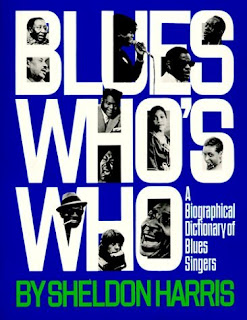 The Irwin Stambler and Grellan Landon Encyclopedia, first published in 1969, is a pretty good example of this type of thing, balancing readability with genuine scholarship and a good grasp of how porous the boundaries of the subject are...there are entries for Muddy Waters and Tom Jones alongside those for the Sons of the Pioneers and the Joy (a musically-eclectic duo of women who had been the core of the Joy of Cooking in the late '60s/early '70s); if there aren't sufficient photographs of Emmylou Harris, could there really ever be? More serious complaints can be lodged about the proofing/fact-checking...for example, the listing for Roger McGuinn gives the title of the first Byrds album as The Byrds rather than as the proper Mr. Tambourine Man (they didn't release an eponymous album till after the band finally died, two years after their last album called Farther Along was released in 1971, and the original lineup reformed for a dispirited reunion recording session later in 1973), and about some of the citations that might be here but aren't...one might reasonably expect an act with two major-label releases such as the Modern Folk Quartet to get some recognition, even if they were more important as a live band with a regular gig in one of the major folk-oriented nightclubs, but no such luck (after all, this kind of relatively obscure band is what one often seeks out this kind of reference for).  But this book strikes a nice balance between the extremes represented by the other two.

The Harris book is an odd duck...it is a fairly comprehensive and focused book about blues performers, but as the subtitle suggests it's given over more to those who sang than those who performed in other ways, and it has rather odd criteria for inclusion/exclusion: Jimi Hendrix, Mike Bloomfeild, Janis Joplin and John Mayall are in, for example, but the Rolling Stones, the Animals and the Yardbirds, collectively and individually (even Clapton), are out. "Little" Richard Penniman is in (and the book tags everyone by their legal names, so Muddy Waters is in as Morganfield, for example) but Gil Scott-Heron is out. More importantly, each entry is devoted heavily to club dates and, to a lesser extent, television and radio appearances each artist made, to the virtual exclusion of other biographical and professional data, including discographies...truly information that might be hard to find elsewhere, but not only very dry as a casual read, but also hard to verify and at times, at least, rather less important than the information left out.

While the Wallace and Handsome Dick Manitoba (as he was billed during his days as lead singer for the Dictators) volume is breezy fun, and not terribly focused and by intention not a reference (though useful data can be extracted from it, aside from whom Debbie Harry was kind enough to list as people she wouldn't've minded coupling with in 2006, to which she appended the proviso that if one felt they were improperly left off the list, they could apply for inclusion by contacting her through Manitoba)(while she's 67 now, her ridiculous beauty hasn't faded that much, and everything else about her, from wit to talent to some renown as a genuinely kind person, might just lead anyone to seriously ponder that not-so-serious list and offer).  Unlike entirely too many books about punk rock, this one doesn't try to pretend punk vanished in 1983 or earlier when the kool kids stopped caring in Manhattan, as opposed to going into an even richer phase than the first decade or so of self-conscious existence, and the book is eclectic enough to go beyond the music to literary and other allied concerns (even if "cyberpunk" and "splatterpunk" are the only   -punk fictional modes explored, steampunk having not yet achieved faddishness nor literary cowpunk, any more than now, come to broad public attention by the 2007 publication of the book). A fun read, even if the more freakish facets of this intentionally freak-friendly music and culture (and the music treated with here ranges well past punk and past allied sorts of heavy metal and garage band music and mutual progenitors to the likes of Jethro Tull in certain instances) get more play than is remotely representative...part of the Official Book of Lists tradition, after all. Perhaps the punkest thing about this book is that it was published by Backbeat Books, a division of the hopelessly but cheerfully unpunk Hal Leonard Publishing concern (if you are reminded of marching band music, you are not incorrect).

All of these are now out of print but available for reasonable prices from the usual suspects, at least used.
For more of today's books, please see host Patti Abbot's blog.
Posted by Todd Mason at 10/19/2012 10:15:00 AM