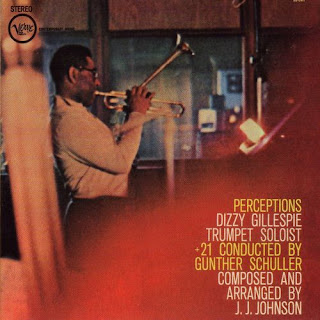 There was a sporadic presence of jazz on television as I grew to love the music...in the 1970s one might catch a performance on The Tonight Show (or, more infrequently, on Saturday Night Live) and there was (starting in 1983, though somehow I remember it being earlier), somewhat intermittently it seemed, Oscar Brown, Jr.'s series From Jumpstreet, or the very occasional appearance of jazz musicians on PBS's other music series such as Soundstage or Austin City Limits. The small but persistent efflorescence of jazz programming from the 1960s was gone, and no one seemed too interested in repackaging it or even simply repeating it...the innovations of the latter 1980s, such as Sunday Night/Night Music, hadn't arrived yet. When Mister Rogers' Neighborhood was one of the more reliable sources of jazz music on television, you knew things had reached a pretty pass. So, here, after the complete presentation of a notable third stream work I'd missed over the years, are two episodes of Jazz Casual, jazz critic and Rolling Stone co-founder Ralph Gleason's NET (proto-PBS) series, bookended by some European presentations of comparable heroes of mine.


The Thelonious Monk Quartet in Denmark:

To make up for the disappearance of this, here's the MJQ on the UK series Jazz 625:


And also the full episode with the Bill Evans Trio: