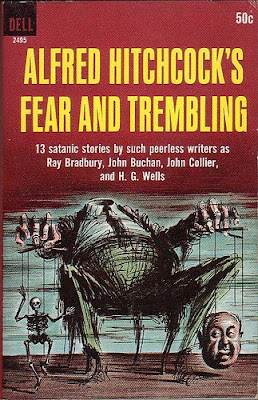 The 1963 reprint I have (which, in a typical Dell confusion move, is entitled AH Presents: F&T on the title page). 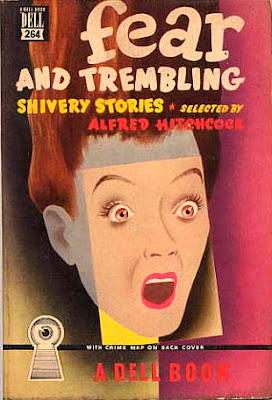 The original, mapback Dell edition.
...then again, no reason this one and its companions early on couldn't be ghosted. But, with the anthologies starting in the next decade after the advent of the Alfred Hitchcock Presents: television series, someone was always careful to credit the actual editor, with Hitchcock's thanks for the Invaluable Assistance of (usually Robert Arthur, after the first volumes, till Arthur's death), but these other 1940s anthos also have no such credit: Suspense (Dell, 1945), Bar the Doors (Dell, 1946) and The Fireside Book of Suspense (Simon and Schuster, 1947), which last "Zybahn" at the fine Casual Debris blog notes is essentially a hardcover expansion of Suspense (but see Updates below, and the comments) (here's his Bar the Doors review--see the original Dell mapback covers, front and back, below).

So, this anthology features a number of stories Hitchcock himself might well've read himself in his relative youth, with the most recent stories (the Bradbury, the Wakefield, the Collier, the Woolrich/Irish) all quite possibly drawn to his attention as possibilities for adaptation one way or another...and certainly they seem like the kind of stories he might like for that purpose. Suspense, the radio series, did their rather famous adaptation of "Ghost Hunt" in 1949--it was first published in the clangorous Weird Tales 25th anniversary issue. And it's a solid mix of chestnuts (which M.R. James story have you seen everywhere?) and such eventual chestnuts as "The Jar" with items that are too often overlooked today (such as the Bowen or even the Woolrich). 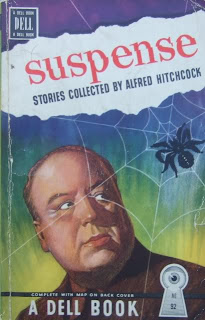 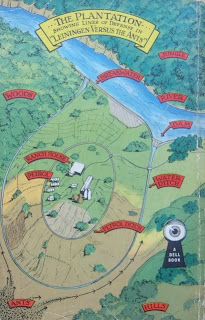 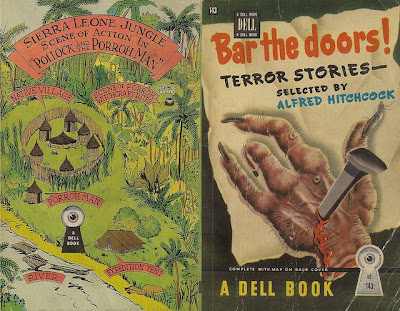 And, in further discovery (at least for me in my belated way), the first of the YA anthologies attributed to Hitchcock for Random House, AH's Haunted Houseful (1961), is ghost-edited not by Arthur, but by Muriel Fuller...and one can definitely tell the difference...as pleasant as this anthology is, it isn't nearly as sharply-edited nor as likely to appeal to both young and adult readers as the Arthur anthologies...contents courtesy AlfredSpace: 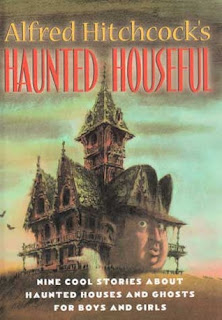 "Let's Haunt A House" by Manly Wade Wellman,
"The Wastwych Secret" by Constance Savery,
"Jimmy Takes Vanishing Lessons" by Walter R. Brooks,
"The Mystery Of Rabbit Run" by Jack Bechdolt,
"The Forgotten Island" by Elizabeth Coatsworth,
"The Water Ghost Of Harrowby Hall" by John Kendrick Bangs,
"The Red-Headed League" by Sir Arthur Conan Doyle,
"The Treasure In The Cave" by Mark Twain (a long excerpt from Tom Sawyer),
"The Mystery In Four-And-A-Half Street" by Donald [Culross] & Louise Peattie.

Please see George Kelley's blog for the rest of this week's "Forgotten" books, and I'll be hosting the links list next week, with Patti Abbott returning the week after next from her prowling (hobbling?) the unsuspecting streets of Gotham...

Updates: Thanks to Jerry House, for noting that I'd completely missed another 1940s "AH" antho, Hold Your Breath (Dell, 1947), even though "Zybahn" lists it, and Jerry notes that there were some substitutions in the process of expanding Suspense for the Fireside Book; BV Lawson also notes that whoever was choosing these stories was demonstrating extraordinary taste, and that I'll agree with...I can believe that the mix of old AH favorites like John Buchan and new adaptation-ready items (Hitchcock hadn't yet done Rear Window from Woolrich's story, but he would) make it possible AH edited these, at least in part, but I share Jerry's suspicion that they are probably just yet another "celebrity editor" from the film-world set of ghost jobs, and the Zane Gray Western Magazine editor for Dell, Don Ward, might well be a likely choice. No thanks whatsoever to Blogspot, which is fighting with both my webbrowsers and not letting me comment on my own blog (other Bs, koff, blogs are OK)...but I might've just thought of a way around that... 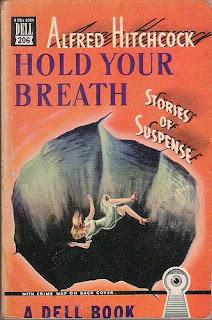 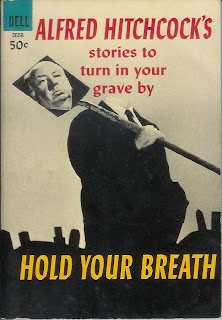 Well, if indeed Hitch was indeed the editor and also selected the stories (at it says on one of the covers), then he had pretty fair taste, judging by the collection of names included in the anthology. Or as you say, he was drawn to stories he might be interesting in adapting to film/TV. He once said "But very often the director is no better than his script."

The 1964 Dell edition was retitled ALFRED HITCHCOCK PRESENTS: 14 SUSPENSE STORIES TO PLAY RUSSIAN ROULETTE BY and substitutes C. B. Gilford"s "Never Kill for Love" in place of "Leiningen Versus the Ants". The 1947 FIRESIDE BOOK OF SUSPENSE reprints 11 of the original 14 stories (omitting the Steele, Stockton and Bierce) as well as the original introduction, and adds 16 additional stories.

For its time, the five early Hitchcock compilations for Dell (FEAR AND TREMBLING, SUSPENSE, SUSPENSE STORIES, BAR THE DOORS, and HOLD YOUR BREATH) presented a lot of (then) unfamiliar stories, most of them pretty good.

I don't know if Hitchcock editd these himself, but a part of me thinks he did not. My betting money would be on an anonymous Dell editor or someone like Don Ward or Jean Webb. I suspect Hitchcock viewed the books as good publicity and possibly as an additional revenue stream. I've nothing to back this up, you realize, just my gut feeling.

Wow, an exhausting list of things; quite the little industry in Hitchy books.

I collected all the DELL Hitchcock anthologies over the years. Loved the covers! And I found the quality of the stories to be above average. Whoever was doing the selecting (Hitchcock or Arthur or some anonymous editor) certainly succeeded in providing some very enjoyable collections.

Yes, it's a complex set of threads to unravel, Kate...and, George, they have been a pretty impressive set of anthologies, and they are still ongoing (the ones from AH MYSTERY MAGAZINE, anyway, these days often as not mixed with ELLERY QUEEN'S MYSTERY MAGAZINE stories)...as the first Dell/S&S series was edited by possibly AH and probably ghosts (not yet id'd, as far as I know), the ALFRED HITCHCOCK PRESENTS: series, starting after the television series began, were edited by Patricia O'Connell (1 volume, MY FAVORITES IN SUSPENSE), the CBS censors (1 volume--STORIES THEY WOULDN'T LET ME DO ON TV, possibly with ghost editing, at least to handle the permissions and sequencing), and then Robert Arthur from the next volume till his death in 1969, at which point Harold Q. Masur took over till Hitchcock's death (and THE MASTER'S CHOICE) in 1979...to further cofusion, a few of the ALFRED HITCHCOCK'S ANTHOLOGY issues (as I refer to them) from Davis Publications had simultaneous hardcover publication from the Dial Press, which referred to them as AHP: volumes, but they were simply further best-ofs of the magazine, which have continued to come from various publishers including Dell/Dial Press over the years. Meanwhile, Dell published the best-ofs from AHMM starting shortly after its founding in 1956, the ALFRED HITCHCOCK'S ___ ___ series (NOOSE REPORT, DEADLY DOZEN, etc.), and Robert Arthur branched out to write or oversee the children's AH AND THE THREE INVESTIGATORS mysteries and the YA anthologies, beginning with the second after HAUNTED HOUSEFUL (which was edited by Muriel Fuller), and the two post-Arthur YA anthos edited by Henry Veit.

Hi. I'm not sure if it is okay to post this, but Scott Fivelson's new play, Dial L for Latch-Key is making the rounds on stage in London. It is available as an eBook from Barnes & Noble. It is a spoof of Dial M for Murder and about a half dozen other Hitchcock films. Link: http://search.barnesandnoble.com/books/product.aspx?ean=2940012249647

Thanks so much for posting a link to my review of Bar the Doors. I've recently found the time to invest in some research, and Bar the Doors was indeed ghost-edited by Don Ward. The Dell Mapback cover was illustrated by Gerald Gregg, the map designed and drawn by Ruth Belew.

To further complicate the history of these publications, many of the anthologies, AHPs and YAs both, had different editions containing different stories, many of which are simply abridged versions of the original. Other editions included identical contents but were re-titled, such as Stories that Scared Even Me, which had derivative collections titled, Scream Along with Me and Slay Ride.

There was also a series of Four Square titles (an imprint of NEL) ghosted by UK master anthologist Peter Haining from 1966-1971, with titles like Guaranteed Rest in Peace and Other Macabre Tales and Meet Death at Night and Other Tales of Terror.

The 1990s also saw a series of anthologies collecting AHMM and EQMM stories selected by theme, so Murder Takes a Holiday is about stories set outside North America, etc.

I sometimes wonder which single story was reprinted the most in these books, as some reappear several times.

Indeed, Z, and sorry I hadn't mentioned the Dell retitlings of some of their "halfsies" AHP reprints...and I'm not sure if it was content objections, second-guessing on the level of sophistication or antiquity, or What that led to the paperback editions of the YA books missing a few of the stories Robert Arthur picked for the original editions. Of course, I was aware of the post-AH's passing confusion in some of the best of the magazine AHMM taking the AHP title format, but had utterly overlooked Haining's books. Good thoughts, and good for you for keeping up with this.