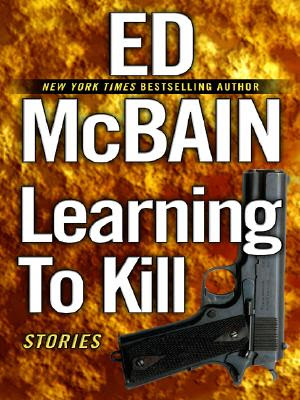 A year or so before he was diagnosed with cancer, Evan Hunter seemed intrigued by my idea of doing a massive collection of some of his earliest tales. Intrigued enough, anyway, to have somebody make copies of sixty-some stories and send them to me.

We had everything ready to go when Evan had second thoughts. There were just too many of these stories he didn’t want to resurrect.

In Learning to Kill (Harcourt, $25) Evan and Otto Penzler have brought together the very best of those early stories in a stunner of a hardback package. This shows you how early Hunter was a master of both form and character.

He wrote well across the entire spectrum of crime and suspense stories, so well in fact that several of these stories are true classics that will be reprinted for decades to come – “First Offense,” “Runaway,” “The Merry Merry Christmas,” “On The Sidewalk Bleeding” and “The Last Spin” aren’t just for readers. They’re also for writers. These particular stories yield great insights into use of voice, plot, character and milieu. I could teach a full semester of writing using just those stories I mentioned.

Hunter/McBain was one of the two or three best and most influential crime writers of his generation. Otto Penzler has paid tribute to that fact with this hefty and important contribution that belongs in every mystery collection.
Posted by Todd Mason at 3/25/2011 09:38:00 AM

The McBain is indeed a terrific collection. I wish they had published all the stories.

(WARNING - perhaps - if you haven't read COMA and want to)

As for the others, surely I can't be the only one to think COMA shamelessly ripped off Christianna Brand's GREEN FOR DANGER?

That one book made his whole career. Face it, he is not a very good writer and most of the rest of his books are (to my mind, at least) pretty crappy bestsellers.

He's one of the perfect examples (sadly, there are others) of a writer who hits the bestseller list once and then over and over again even if unworthy of doing so.

But then, a lot of readers can't tell the difference between good and crap.

Yes, well, there's the right kind of bad, Jeff. I find even more saddening are those who can do better, but are relentlessly rewarded for doing anything (Stephen King) or whose better work is actively disregarded (Gary Jennings)...there are all kinds of consistently bad writers who are consistently hailed, ranging from Whitley Strieber to William Vollmann to Dave Eggers to John Irving (even though he isn't heard too much from any longer) to Bret Easton Ellis, to stick with just the men for a moment.

Well, Anon., this Gorman piece is one of a number that are part of this week's "Friday's Forgotten Books"; one of the other suggestions made was COMA by Robin Cook, and Jeff is expressing his take on that novel's derivative nature.