Tuesday's Overlooked Films and Other A/V: HOTEL; WTF and THE REALIST; MONITOR 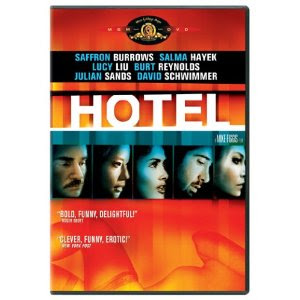 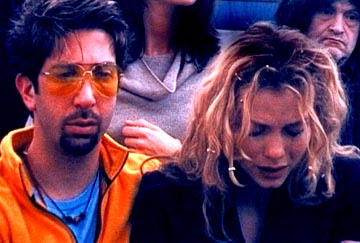 Hotel is a film designed to displease many...particularly if one is not willing to take it on its terms, till its narrative threads appear or reappear. It's the account of a very troubled film shoot...an attempt to do a low-budget, Dogme 95 film version of John Webster's best-known work, The Duchess of Malfi, a play at least as invested in court politics and skullduggery as any of Shakespeare's, and as a result an organic metaphor for the goings-on around the production, which are as prone to outbursts of bad temper and the playing out of hidden agendas as anything in the play itself. The play has been dumbed down, in the film, by scenarist/actor "John Shirley" (played by Heathcoate Williams, who actually did help script the film, in one of writer-director Mike Figgis's many injokes; the actor playing Antonio in Malfi, Max Beesley, is a decent jazz pianist whose character in Hotel is offhandedly referred to as "Gerry Mulligan," after the saxophonist/pianist/bandleader). The producer (played by David Schwimmer) lusts after the director's paramour, and the star of the Duchess film (Saffron Burrows) and so hires one of the staff of the Venetian hotel where all the cast and crew are billeted to shoot his old friend, the director (Rhys Ifans, playing quite the indulged, tantrum-prone prat). The hotel is full of sinister goings-on, as the staff seems to be made up of possibly vampiric and definitely human-flesh-eating creatures, who are seen at the beginning of the film having tricked a foolish American tourist (John Malkovich) into joining their nightly feast, only to clearly become the main menu item for the next night.

As rather good bits of Malfi are shot throughout the film (and failed bits, as well), we see the further unraveling of the film crew's plans and work, not aided by the occasional interruptions and challenges of a Making-of documentary crew, mostly composed of the airheaded interviewer Charlee Boux (Salma Hayek) and her cameraman/soundman/producer (Lucy Liu's Sawika sweeps in to help that struggling effort along). The director, after being shot, is in paralysis for much of the film (blatantly misdiagnosed as a coma), and so the producer steps in, not only to woo the leading lady but to put his own amateurish stamp on the production.

The film is largely improvised, yet never loses structure (that it returns to the play regularly helps in this) and remains genuinely funny throughout, even as it manages to keep an edge of menace between the machinations of the staff and the interactions of the film people. That the cannibal hotel-staff tourguide (Julian Sands) yearns for the days of Italian fascism and is only one of several characters to openly mock Dogme film-making is among the many sly touches that help keep the good humor going; the multiple-screen approaches Figgis had previously explored in Timecode and the supernatural themes of Liebestraum come to fuller flowering here.

I must admit, it's a little odd for me to agree so strongly with Roger Ebert, who thinks it a brilliant film, and Elvis Mitchell, only slightly less enthusiastic, and to disagree so strongly with my friend Kate Laity, who is not alone in reviling the film (though I've yet to get a detailed pan from her). 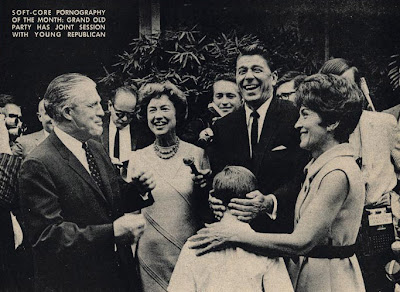 The most recent episode of Mark Maron's podcast, WTF, is an interview with Paul Krassner, he most sustainedly of The Realist magazine and newsletter, from 1958 to 2001 with a few years off for odd behavior. Maron is seeking large answers to large questions about what the ultimate meaning of Krassner's and Bruce's work is, and the nature of their challenge to society in particularly the 1960s (though of course both began their key work in the latter '50s)...which is as good an opportunity as any to drop in a plug for The Realist archive website, a comprehensive facsimile of the magazine's run. I only wished this hadn't gone up just after I'd blown my deadline for a long essay on The Realist for a collection of cult-magazine historical essays. 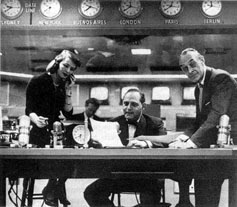 Meanwhile, since we're probing the '50s and '60s, here's an interesting archive of a rather more Socially Acceptable project, which nonetheless allowed for some interesting satirical and related work to be done within the confines of commercial network radio--the longform weekend project that was NBC's Monitor, from 1955 to 1975 essentially a weekend-long mixture of reportage, radio documentary and comedy (featuring Bob & Ray and many others, including Nichols and May early in their career together), and hardly conceivable outside public radio today...albeit with some of the slickness and a fair amount of the shallowness that commercial radio demanded. (Dom Imus, early in his career, was a host, as was Gene Rayburn...though Henry Morgan is remembered more fondly...)
Posted by Todd Mason at 3/01/2011 02:00:00 AM

I've never seen it but I did like Timecode and Figgis' earlier, funny films.