FFB: THE COMPLEAT OVA HAMLET by Richard Lupoff (as illustrated by Trina Robbins and introduced by Philip Klass aka William Tenn) among others... 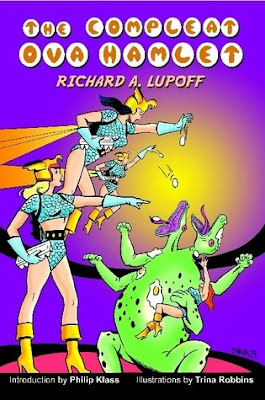 It's 1977, and my friend Steven Durost has just flashed a copy of a magazine called Fantastic that he found in the Londonderry Junior High library...the June 1971 issue, no less (six years seemed very long before at the time), with a cover devoted to Poul Anderson's The Byworlder (editor Ted White always liked to keep things a bit mixed up, so the straightforward sf of the Anderson was in Fantastic while the borderline surreal fantasy of Ursula Le Guin's The Lathe of Heaven was being serialized simultaneously in the sibling Amazing Science Fiction). I knew I had to read that, and that my father might want to check it out, as well...since it had one of the few unreprinted Larry Niven short stories in it, a collaboration with Hank (later Jean Marie) Stine called "No Exit," as Niven had with his 1960s and early '70s work temporarily dislodged Arthur C. Clarke as my father's favorite writer. Generally, it looked cool. 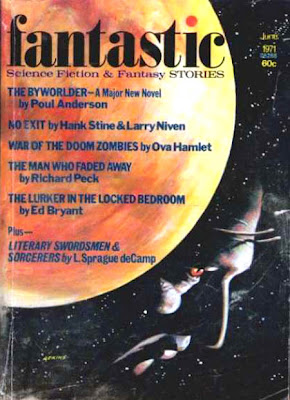 The librarian was happy to let me have the 1971 Galaxy, Worlds of If, and F&SF issues that someone, presumably a teacher, had left in the library sometime over those years, and not actually added to the collection nor apparently disturbed till Steve plucked the Fantastic (he liked the Fantastic Adventures pulp reprint in the issue the best, Festus Pragnell's "War of Human Cats"...well, it was strange and endearingly goofy), and Steve let me know when he was returning the Fantastic, and it was passed onto me for good as well.

And it was a fine issue of Fantastic, as it turned out...clever horror or surreal fantasy by Richard Peck, Ed Bryant (both at the beginning of their careers), and this odd, hilarious parody, "War of the Doom Zombies," attributed to an eccentric old woman supposedly named Ova Hamlet, who worked through her obvious alter ego, one Richard Lupoff (whom I knew as a contributor of a short novel to the clangorous anthology Again, Dangerous Visions). Fantastic would make much hay with Conan pastiches over the rest of the '70s, though entirely too many of them were by Lin Carter (or Carter in collaboration with L. Sprague de Camp, ready to begin his years-long argument with Robert Howard's supporters with his first essay on Howard and the first of his biographical and critical essay series "Literary Swordsmen and Sorcerers," which would also run for years in the magazine)...but this "Hamlet" evisceration was far more savage than any of the Cimmerian's attacks on a foe. I dug it, to say the least. And while most of the Lupoff I would stumble across in new publications and the random back issues I would find were in other modes (I found his "Lupoff's Book Week" column in Algol/Starship particularly enjoyable, along with the fiction, the critical/historical nonfiction, and the odd anthology), I was always very happy to find a Fantastic back issue with a Hamlet story, and was bitterly disappointed that the shakeup at Fantastic and Amazing delayed indefinitely (it seemed) the publication of the promised "Two Sort-of Adventurers," taking on Fritz Leiber's Fafhrd and the Grey Mouser (the next-most-famous characters in sword & sorcery fiction, really, after Conan, and great favorites of mine). I (barely) caught word of the 1979 publication of the first edition of this collection, but didn't take sufficient initiative to seek it out specifically via mail-order (since in the southern New Hampshire/Boston and then the Honolulu suburbs, I had no walk-in access to true specialty shops in '79 and '80)...but it's taken me only four years to rectify this oversight with the 2007 expanded and revised Ramble House edition.
Phil Klass's introduction is unsurprisingly urbane, and adept in delineating the differences between parody, which requites capturing the flavor and rhythm of the work being critiqued, and burlesque and similar modes, which can simply mock. Trina Robbins, like Lupoff an important figure in comics as well as sf/fantasy prose and fannish circles, provides charming caricatures to go with most of the items here (including at least one new to this edition), though I miss the (Jeff Jones? Joe Staton? I don't have a copy of the issue at hand) illo from "Doom Zombies"'s original appearance. [Late bulletin: ISFDb informs us it was Bill Graham.]

The parodies are detailed (not quite completely) on the back cover:
J. G. Ballard: "In the Kitchen" (within the context of a parody of Judith Merril, as crusading editor of England Swings SF, here given as Isle of Man Swings SF)
Norman Spinrad: "Music in the Air"
Harlan Ellison: "Battered Like a Brass Bippy"
Robert E. Howard: "War of the Doom Zombies"
H. P. Lovecraft: "The Horror South of Red Hook"
Philip K. Dick: "Agony and Remorse on Rhesus IX"
Barry Malzberg: "Grebzlam's Game"
L. Ron Hubbard: "Young Nurse Nebuchadnezzer" (one of the items I'd read in another Fantastic back-issue, long before I'd ever seen an example of the "Old Doc Methuselah" stories...at least I'd seen Conan books and comics before the Howard story!)
Kurt Vonnegut: "The Wedding of Ova Hamlet"
Philip Jose Farmer: "God of the Naked Unicorn"
"John Norman": "Nosepickers of Dawr"
Fritz Leiber: "Two Sort-of Adventurers" (it was eventually published by White successor Elinor Mavor)
Stephen King: "Phannie"
and Mickey Spillane: "Death in the Ditch"

It's a great mix of nostalgia and newfound pleasure to have these all together, and note how few missteps Lupoff, one of our sharper observers at any given time, takes.
This book is not out of print, but Ramble House, and Lupoff, deserve your support in the offer of this fine, even necessary volume (I've been lucky enough to meet both the late Phil Klass and the happily still-writing Lupoff on a couple of occasions each, as well as host a scrap of Dick's writing here a few weeks back. If you find yourself moving on from this to Lupoff's more straightforwardly satirical or even utterly more straightforward work, all to the good...old fans of Ova will need to read Blodwyn Blenheim's account of Hamlet's recent course through life...and you get a photo of Hamlet, or just maybe Lupoff, as an infant in 1938 on the back cover, to boot...).

The Google Books "preview" and the Ramble House and Lulu pages.

Great choice! Lupoff is a treasure and Ova -- even though her eggs were scrambled once too many times -- is delightful.

These are great parodies, or at least the ones I've read are. Good pick!

Thanks for enlightening me about this. I'd seen it in Fender's catalog many times. I had no idea the title referred to a Lupoff pseudonym.

Only read THE COMIC BOOK KILLER by Lupoff. I'll definitely investigate this if for the Lovecraft parody alone.

Thanks, gentlemen, and you're also quite welcome, John. Lupoff has been writing primarily crime fiction for the last decade or so, so there's more awaiting you, as well as more Lovecraft-related fiction.

Thanks, Patti. Having read stories from FANTASTIC for years, it was good to finally clearly see an issue (and shortly thereafter a mid-1960s issue popped up, in, of all places, a Crown educational film, as some of the reading material of a teen boy briefly profiled. This might've been the same one featuring an actor of sorts facing the camera and enlivening the first line of MOBY DICK by reciting it as "YAI BAI ISHMAEL!" The words "call" and "me" were at best approximated.

Space War Blues. Recently reconnected with Mr. Lupoff on another matter and told him how much I loved this stuff. John Sladek also did some wonderful parodies of contemporary SF writers for F&SF, including a great PK Dick parody "Galactic Shoe Salesman"