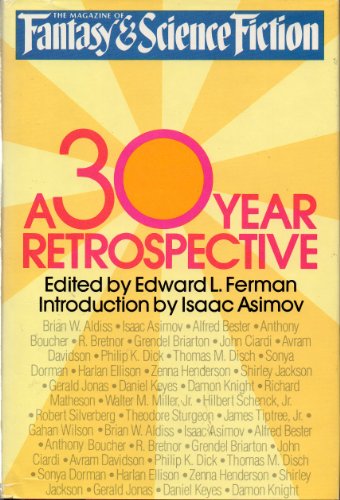 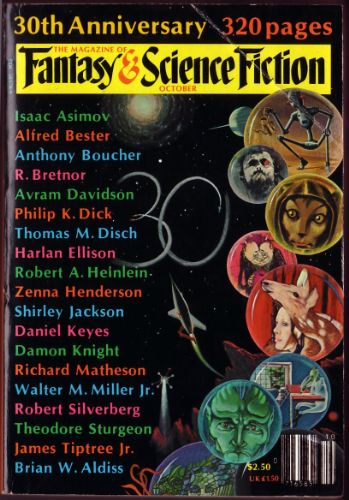 From ISFDb (and I'm cheating here, listing the slightly fuller contents of the October, 1979 issue, rather than the subsequent Doubleday hardcover, The Magazine of Fantasy & Science Fiction: A 30 Year Retrospective, that failed to reprint the columns by Budrys, Searles and Asimov, nor Heinlein's short story, nor all of the Wilson cartoons), though it adds a brief Asimov introduction to go with Ferman's: 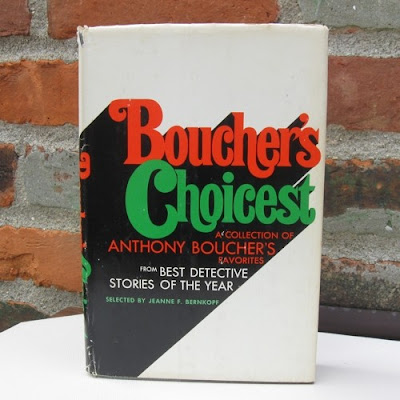 Table of Contents
H as in homicide, by Lawrence Treat.
Justice, inc., by Rog Phillips.
The adventure of the double-bogey man, by Robert L. Fish.
File 1: the Mayfield case, by Joe Gores.
A humanist, by Romain Gary.
A case for the U.N., by Miriam Allen deFord.
A soliloquy in tongues, by William Wiser.
I will please come to order, by William North Jayme.
His brother's keeper, by James McKimmey.
The opposite number, by Jacob Hay.
The right man for the right job, by J. C. Thompson.
The adventure of Abraham Lincoln's clue, by Ellery Queen.
The chosen one, by Rhys Davies.
The adventure of the red leech, by August Derleth.
The two kings and the two labyrinths, by Jorge Luis Borges.
Papa Tral's harvest, by Barry Perowne.
Good man, bad man, by Jerome Weidman.
The Stollmeyer sonnets, by James Powell.
The Dr. Sherrock commission, by Frank McAuliffe.
The oblong room, by Edward D. Hoch.
The peppermint-striped goodby, by Ron Goulart.
The gracious, pleasant life of Mrs. Afton, by Patricia Highsmith.
By child undone, by Jack Ritchie.
The possibility of evil, by Shirley Jackson.

Two anthologies that are both at least in part retrospective tributes to Anthony Boucher, cofounder of F&SF, and later editor of six volumes in the long-running crime-fiction annual, up till the time of his death...Allen Hubin took over at that point.

Edward Ferman, by 1979 both editor and publisher of F&SF for some years, polled his lifetime subscribers for input as to which of the stories from F&SF's past deserved most to be reprinted in the first all-reprint fiction and poetry issue of the magazine, and the subsequent book version...and while the voters couldn't settle on a single work by Fritz Leiber, Robert Bloch, Joanna Russ nor Manly Wade Wellman (thereby all but invalidating the process), they were able to provide the above list of favored work from the magazine's rich history...and Ferman only overruled them once, as far as I know, by substituting the very personal story "Selectra Six-Ten" for "The Golem," one of the most famous but perhaps somewhat less distinctive of the stories of Avram Davidson, the previous F&SF editor and with whom Ferman had worked as assistant editor. Boucher had been founding co-editor from 1949 (and earlier) to 1954, and continued to edit the magazine alone for several more years before turning it over to Robert P. Mills, aided by C.M. Kornbluth, for several more (though Kornbluth's premature death kept his tenure short).

Truly a brilliant assemblage, even with the missing-writer caveats. Richard Matheson's first story, and the first by Damon Knight to get much attention, are both eminently memorable, but slight in the company they keep here (or when compared to some of their other stories to appear later). Daniel Keyes's "Flowers for Algernon" is almost impossible not to include (even if one wanted to exclude it), and Boucher's own "The Quest for Saint Aquin" is the only story originally published elsewhere. Meanwhile, Algis Budrys reviews Robert Onopa's The Pleasure Tube , which I keep meaning to dig back out for FFB, but I definitely need to reread it...both men would have a major effect on my writing, Onopa as my first writing professor.

Meanwhile, Dutton editor Jeanne F. Bernkopf looks back through the BOTY volumes Boucher edited for her list, and recalls the stories he either did or at least seemed to enjoy most, and reprints Boucher's headnotes in their reprinting here...not only an excellent compilation and probably a pretty fair representation of what the already late Boucher would've culled for his own Best of the BESTs, but also notable for how many of these writers were still doing notable work a decade later, when I was catching their new stories in the magazines and elsewhere. Allen Hubin, who would inherit the editorial post for a handful of years, turning the series over to Edward Hoch for the longest reign the annual would see (through title-change and a new publisher), puts Boucher in context in his brief introduction, and the stories, heavily running to Ellery Queen's Mystery Magazine and Alfred Hitchcock's Mystery Magazine stories with a few other sources (Hoch's own brilliant "The Oblong Room" comes from The Saint Magazine), speak very entertainingly for themselves. 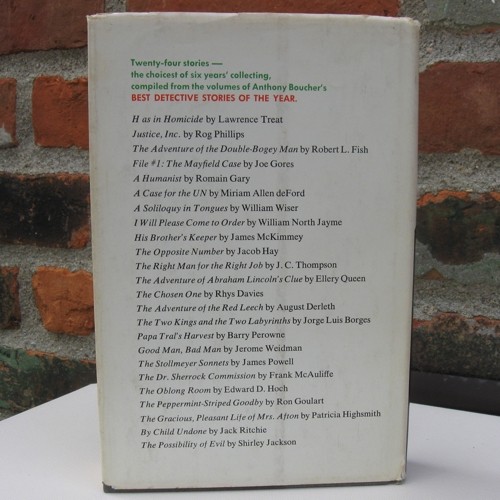 At least two more tribute anthologies were produced just after Boucher's death, the crime-fictional Crimes and Misfortunes and the fantasticated Special Wonder, and even they, fine anthologies both, are not better than these selections from Boucher's
own considered acceptances (and those of his partner and heirs, in the first book/issue). If you don't have these volumes...I suspect you can see you might need them, and you will suffer no pain in reading them.

Fantastic books. Fantastic contents. Thanks for this post, Todd.

Thanks, Jerry...and it always helps to keep the titles straight in the header (CHOICEST, not simply CHOICE). Not quite enough time last night to do all the detail work I'd like, but these are eminently impressive anthologies.

Forced to choose a favorite digest from my digest-reading years, I'd have to go with F&SF.

Me, too, with a sentimental close-second nod toward FANTASTIC in its good years. Though you don't find yourself reading any of the digests much, presumably aside from EQMM, any more? I certainly don't take the opportunity to read many from cover to cover these days...

Verrry interesting, as the Henry Gibson character said. I remember seeing these, but was so wrapped up in Astounding and the Campbell-influenced writers that I always thought F&SF was #3, after Astounding and Galaxy. I know, I know, a LOT of people disagree, and my only defense is lack of experience. I simply re-read (and re-re-read) Astounding and all the paperback SF I could find at the local book store, a lot of it, from Asimov to Williamson.

I have read nearly all of the items mentioned here, excepting the reviews, essays and cartoons (if one can be said to "read" those). I would say the Sturgeon, Keyes and Dick would be the highlights for me. Speaking of Sturgeon, this collection certainly breaks his Law!

I don't read digests any more, those old ones are gone and the new ones hold little interest for me when there are so, so many other things I wish to read.

I would trust Boucher's choices. He was a great reviewer in his day.

He was a much more diversely excellent literary figure than solely a critic, Patti, as Hubin takes pains to note (and as these books demonstrate in several ways).

You know, Rick, a lot of people sort of fell into a default overrating of ASTOUNDING, because it Was better than the other sf magazines in the 1930s and early 1940s (though the best of the Futurian magazines--ASTONISHING, SCIENCE FICTION, even the Kornbluth stories in COSMIC and STIRRING SCIENCE STORIES--were usually worth the look, and from time to time both AMAZING and THRILLING WONDER managed to cough up a decent story among the early 1940s pap)...though the bloom was off the rose for the most part by the end of the 1950s, which didn't do enough to stem the Inertia of Reputation...even while so many other magazines had been doing as well or better since the late '40s. And F&SF was much more consistently good than GALAXY was, after the breathtaking first five years or so, the long slide didn't start reversing itself till Frederik Pohl was able to get the magazine and its new stablemates back on their feet in the early '60s. Edward Ferman too often doesn't get enough credit, as well, for being a pretty impressive as well as by some distance the longest-serving editor (as well as publisher for more than half his term editing) of the magazine.

Well, I certainly can't insist that anyone read the digests (though I think they are collectively shortchanged)...but a whole lot of great and good is passing through EQMM, F&SF, AHMM, ASIMOV'S, BOULEVARD, the larger-sized TIN HOUSE and the others (including those heretical 8.5 x 11 magazines we hear so much about).

One of the strangest things I find is how differently these pages look when viewed with Internet Explorer and with Mozilla Firefox. Blogspot plays a bit better with the former, but the latter does make a few posting operations easier.

GALAXY was my favorite SF magazine, but F&SF was certainly a close Second. I pick up the Boucher edited collections when they show up at library book sales.

GALAXY was usually good, but boy did it fluctuate. I think the early '70s issues were overly villified...and throughout the '70s it was certainly underfunded.

Those tables of contents are always interesting, but don't your fingers get sore?

No, but my hand locks up. At work, too. That's why I try to find the TOCs online, if I can find a reasonably accurate one (the WorldCat TOC not only does the typical library thing with titles, not capitalizing, but also gave all the writers just first or first and second initials...so I fleshed those out). William Contento, Phil Stephensen-Payne and others have indexed usually with first publication data in their online (and offline, where BOUCHER'S CHOICEST resides for them, alas for me here), so when I can take from their online indices, I do (and they could use a few bucks to help keep their effort going...all voluntary, mind you)...the ISFDb is only a little more clumsy for poaching purposes (and uses that odd "shortstory" tag...perhaps as a tracing device where they are not credited).

I just didn't have enough time (all day really) to make the kind of comments I'd like, on such things as, say, Ron Goulart's parody of both Chandler and R. Macdonald in "The Peppermint-Striped Goodby"...but I suspect Leigh Brackett liked it, back when...Robert Fish, too...my eyes would get more sore if I did many from scratch (I have done, so know whereof I creakily type), but might well go back and add publication data to the CHOICEST listing, at least, if I get a chance...

GALAXY was never the same after Fred Pohl left.

True, though each of the following editors (until Hank Stine and Floyd Kemske and EJ Gold) brought something to the magazine, even if by the time JJ Pierce was editing, there was not much budget left to buy anything, and his professional relationship with the widow Linebarger was most of the reason he was able to score those last Cordwainer Smith stories...with a few decent stragglers from Pat Murphy and others. Stine had even less budget, and a misbegotten notion that what was needed was a STAR WARS fiction magazine. Kemske might've been able to do something if Avenue Victor Hugo wasn't closing down its publishing arm (the long-vanished FICTION, the folding GALILEO) by the time they bought GALAXY. Apparently the most recent inpulpation of GALAXY might be worth a look (after the undistinguished, at best, early EJ Gold issues and the weirdly inconstant history of GALAXY as a web presence). Ejler Jakobssen and James Baen had uneven issues, but gosh they published some good work...and the magazine never looked better than in the 1970-72 era, when they did so by working Jack Gaughan to death.