TV notes: some of what I've seen of the "new season" 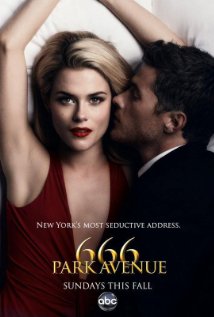 666 Park Avenue A series which wouldn't exist if not for American Horror Story, and while not as pretentious nor quite as silly as AHS, and with a slightly better sense of humor about itself, it's still basically The Devil's Advocate come again, judging by the pilot, and it's a damned shame the most prominent "interracial" couple (played by Vanessa Williams and Terry O'Quinn) in US primetime are rather high up in Hell's hierarchy (this last, of course, is not an indictment of this series so much as all the others).  Another sad bit involves anorectic-looking Rachael Taylor, as the spunky architect-heroine, who, having an expensive gown thrust upon her by Williams's seductress, wears the garment on a double-date to the opera (another sure sign of eevul, attending opera), and the garment, meant to accentuate curves, can't find any on Taylor. (The promo photo at left rather demonstrates all this.)

Dexter Two episodes into this season, it's mostly interesting to see Jennifer Carpenter and Michael Hall  playing off one another to such a great degree, given their actual life status as a divorced couple (thanks to Patti Abbott for the fact-checking), as the series details the stepsiblings' treating with her discovery of Dexter's murderous activities.

The Good Wife The scripts and even the guest casting remain solid (in the second episode, at least two of supporting roles are filled by people at "two degrees of separation" from me, which means I've been working on the periphery of television too long, perhaps).

Copper The (chronologically) second series on this list to owe its existence essentially to Deadwood, as well as having an interesting commissioning station (as the first US dramatic series ordered up by BBC America) and co-creator (Tom Fontana, he of St. Elsewhere and Homicide along with some subsequent work which is solid if not scaling the same heights, such as prison-drama Oz).  Gangs of New York might've made the pitch a bit easier, in this anti-glamorous account of Civil War Irish-American NYC cops, and such friends and acquaintances they have as an African-American doctor and a variety of prostitutes and aristocrats and tradespeople; I'm amused by the literary references these knockabout, but not ignorant, folks are given to make (such as to Cheshire cats and "Ours is not to reason why..."), which I suspect the scripters take great care in vetting for date-probability.

Hell on Wheels AMC's stepchild of Deadwood, a season older than Copper, is an anti-glamorous account of transcontinental railway construction, in the years just after the Civil War, with all the ethnic and class tensions (and ex-Rebels v. Yanks) you could reasonably ask for (but not far enough west to involve Chinese immigrant workers, so far).  You just don't get enough sinister Swedes (who are actually Norwegian, iirc) in US drama...or Scandinavians at all.

XIII, along with being a stepchild of the Bourne films, is the kind of slam-bang "action" drama with a mildly sfnal premise that used to populate the originally syndicated hour slots in the early 1990s on US tv (Xena, Relic Hunter, etc.), and as such it's not bad, if a bit dragged out, as the Bourne analog tries to recover his memory and plumb the conspiracy which "created" him, and Aisha Tyler as an eventually rogue FBI agent (hello, among other things, 24) attempts to help him. A Canadian series imported south by the Reelz Channel.

Bomb Girls is another Reelz Canadian import, a well-cast, slightly soapy account of the US women doing World War 2 factory work, and the tensions and potential liberation (of various sorts) that this brings them. I've seen only the second episode so far.

Call the Midwife is interesting in part as the first "standalone" drama series (as opposed to being tucked into the Masterpiece anthology, the sole survivor in this regard outside of sporadic half-hour one-time-only presentations and the rare Great Performances episode) PBS has offered since American Family a decade back (the one about an extended Mexican-American family starring Edward James Olmos, Constance Marie and Raquel Welch, not An American Family the television verite series from the early '70s), and also in its attempt at a clear-eyed look at the post-WW2 London slums and the young nurse-midwives, and their nun mentors, who attempt to aid at least the pregnant women they work with there, under often-shockingly bad conditions. I've seen only the pilot of this one, so far, which has an intentional disruption of tone, to get across the quality of the lives portrayed, but feels just a bit pat, if game, so far.

Sons of Anarchy I've managed actually not to catch a whole new episode so far (FX loads the On-Demand episodes as heavily with ads as they do the cablecast episodes), to see how thoroughly the too-cod-Shakespearean references would continue...but a series I enjoy nonetheless, even if the supposed alternative nature of what the motorcycle club the SOA was meant to be, as opposed to a small-time crime syndicate that it is, remains elusive. One of the best series on the FX channel, which has an impressive slate, with one or two exceptions...one could wish that Fox/FBC, its broadcast cousin, had nearly as much to boast about.

The only of these series I've seen is the pilot of 666 Park Avenue, and I just saw that on the DVR an hour ago, coincidentally. I'm intrigued so far, but as with any "genre" show, it has to be careful not to get too caught up in its own mythology.

Well...I think you're more kindly disposed toward it than I am at this point. But, as noted, it does have a sense of humor about itself, and perhaps will thrive w/o the kind of ridiculous overpraise American Horror Story has received (even given the often fine cast last year and an impressive one this year--but that writing...).

666 Park Avenue played too much like an Eighties horror novel for my taste. Probably won't watch it again. I like Vegas, but I'm not as blown away by it as I thought I would be when I first saw the commercials for it. I liked the first two episodes of Last Resort, although it suffers a little from the problem a lot of new shows do. I watch them and think, "This is good, but how in the world do they make an ongoing series out of it?"

From your list DEXTER and SONS OF ANARCHY are the only two serials currently running on Indian television though, I'm afraid, I haven't watched much of these either. The current flavour at home, especially with the kids, is GREY'S ANATOMY, THE BIG BANG THEORY, HOW I MET YOUR MOTHER, and GLEE. I have suffered a few early episodes of GREY'S ANATOMY that might have resurrected Patrick Dempsey's career. Indian actors regularly hop over to the more enduring glamour of television to keep their careers afloat. Like their American counterparts, Hindi TV serials run forever, season after season, albeit with oodles of melodrama.

Thanks for the rundown on some of this season's new crop of shows, Todd! I haven't seen most of these (the last new series I've caught up with was A & E's LONGMIRE, which I found pretty absorbing and more entertaining than the rather self-indulgent books it's based on.

Have you managed to check out LAST RESORT or REVOLUTION yet?

Interesting news about DEXTER...I gave up on that series long ago, after the excellent first two seasons.

Every time I watch THE WILD ONE with Marlon Brando, I have to laugh at his portrait of the sensitive motorcycle gang leader. But SONS OF ANARCHY actually makes the part believable. The gang leader is sensitive and believable but can beat the crap out of you if necessary.

James--Indeed, a very minor '80s horror novel (a good decade to get a minor horror novel into print). But, really, The Devil's Advocate, maybe crossed a bit with the first half of Mulholland Drive. I haven't looked into The Last Resort yet, at all.

Prashant--yes, Grey's is pretty dire...it tried to be interesting in its first season with some fitful success, but not much. Interesting that Sons gets clearance there...

Jeff--Nope, haven't seen Revolution, yet, either...looks like a series that wouldn't've happened w/o The Hunger Games. Dexter still also has magical anesthetics; I haven't read the Longmire fiction, but the series was easy to take.

Walker--I think you might well like the Eastern, Copper...it's very similar, as I suggest, to Hell...Sons depends (again in Shakes-style manner) on some adorable coincidences and endless behind the back scheming...that must be tiring to live. But they do (mostly) keep the plates in the air...

I think Hall and Carpenter divorced a year or two ago. A very short-lived marriage. But I could be wrong.

Apparently they were married for two years (on-set romance, I gather, doesn't often last that long, but the formalities might've kept them officially a couple longer), and amicably divorced. Well, that gives you a sense of how much I keep up with US and PEOPLE.

I don't see how 666 Park Avenue can sustain it's single episode idea into a long running TV series. The Faustian stuff is so overdone. It has an awful lot in common with Rosemary's Baby, The Sentinel, and all the rest of the guardian of hell/Satan worshipping crop. Watching the first episode was overkill to me and the second episode wasn't any better. The entire cast deserves better.

Have you already commented on ELEMENTARY elsewhere on your blog? Or will you skip it? I may be the only one who's willing to give it a chance. I like it so far. Miller is fascinating to me. Lucy Liu is actually watchable most of the time (not one of my faves). In the second episode she got to use her knowledge as a doctor to help with the crime solving.

COPPER is the pick of the litter for me. Love the story arc and the excellent cast.

John--I've been meaning to catch ELEMENTARY, but haven't yet. I reverse your take on the actors in question...I generally like Liu, even in weaker projects, and find Miller good enough in what little I've seen from him. Yes, the cast of 666 do deserve better, and someone needs to get Taylor a sandwich.

George--COPPER probably is the best of the new series I've seen, by a hair...some of the endless scheming over the locket, and the thread of child prostitution, are already a bit Much, but I am enjoying the series.